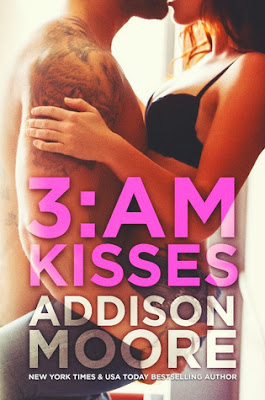 Baya Brighton is looking forward to her first year at Whitney Briggs University, new friends, dorm life, and finally being close to her brother again. Love is the last thing on the list, but when Baya meets her brother’s roommate she begins to have thoughts and feelings that make even her blush.

Bryson Edwards has a secret he prefers buried in the past and long forgotten. He prefers loose girls, fast cars, and long nights working at the string of bars his family owns. When his roommate’s sister shows up on the scene, she’s far too innocent and sweet for him but he can’t shake Baya out of his mind and worse, it looks like she’s seeping into his heart as well.

Baya seems determined to show her brother she’s not a little kid and equally determined to use Bryson’s body to prove her point. It’s been made pretty clear that Baya is off limits to Bryson but their undeniable sparks explode into a whole lot more than just a few 3:AM KISSES.

I received a copy of this book in exchange for an honest review.

So here's my dilemma. I liked this book well enough to give it three stars, though just barely. Bryson, Baya and myself got off to an extremely rocky start and I had a hard time coming back from that. I do hope this comes out with a positive vibe in the end because I didn't hate it by any means, I just took issues with a few things.

Honestly I think I would have liked this book a lot more but for my first impression of Bryson. The way he came off when I first met him really irked me and set the tone, making it hard to let go of that initial irritation. What kind of person thinks it's okay to first of all show a girl you just met the notches on your wall? Not only that but to point to the other wall where her brother's notches are and point those out as well? It's was disgusting not impressive. If I was Baya not only would I have punched him in the junk for being such a sleaze, but I would have done it to my brother as well for being so disrespectful to women. I definitely wouldn't have been crushing on him that's for sure.

I also felt like the story was way too focused on sex. I'm far from a prude, trust me, but I felt like it was just too in your face and was taking the focus away from the rest of the book, which was disappointing. I mean before the whole notch on the wall situation, Baya has just arrived at college and entering her room for the first time, and well any other time for that matter, she walks in on her roommate having sex...and they don't stop they just keep going at it. Her roommate then becomes the butt of jokes (there's a pun in there somewhere!)

After I got past some of my issues the story and the characters were okay. Baya is quick witted and funny. She's always good for a bit of snark or funny comment. Getting over Bryson's man-whorishness, I actually grew to like him. Once he started changing his ways that is. The relationship between Baya and Bryson was a bit rushed for my taste but all the same it was very sweet.

Her brother Cole was another huge frustration. He has this vision in his head that Baya is this sweet, innocent girl, which for the most part she was. Though she wanted to experience new things and grow up, maybe fall in love. Cole had other ideas. He thought fun for her should be joining a book club and dating guys he hand picked for her, things like that. All the while he's man-whoring around sometimes with multiple women right in front of her and thought nothing of it. He treated her like she was 12 and it drove me crazy.

In the end I'd have to say, I enjoyed it for the most part. A little less focus on sex and more focus on the really good storyline and I would've really loved it. New Adult doesn't equal sex, sex, sex.

Addison Moore is a New York Times, USA Today, and Wall Street Journal bestselling author who writes contemporary and paranormal romance. Previously she worked as a therapist on a locked psychiatric unit for nearly a decade. She resides on the West Coast with her husband, four wonderful children and two dogs where she eats too much chocolate and stays up way too late. When she's not writing, she's reading.