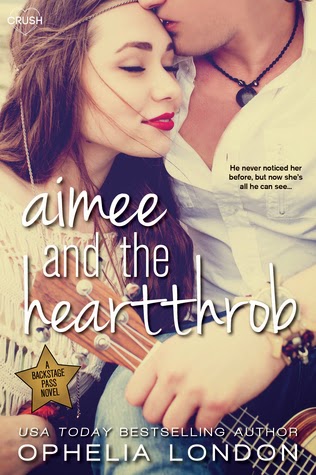 He never noticed her before, but now she’s all he can see…

Miles Carlisle is every teen girl’s fantasy. His rugged good looks and exotic British accent have helped catapult his boy band, Seconds to Juliet, to super-stardom. But after two disastrous and very public breakups, Miles isn’t interested in dating just any girl; he wants The One. And the only girl he’s interested in is not only his best friend’s little sister―and off-limits―but won’t even give him the time of day…

As a kid, Aimee Bingham had a huge thing for Miles…until he made fun of her for always tagging along. Now that she’s outgrown both him and her pigtails. the prospect of spending two weeks on tour with the childhood crush who broke her heart isn’t exactly enticing. Except now Miles seems interested. Very interested. And no matter how hard Aimee tries to resist him, her crush is definitely making a comeback.

Have you ever read a book that was so sickeningly sweet and cute in so many ways and yet also filled with so much tension that through a good portion of it the only thing to run through your head was a chant that just kept going on and on, over and over like a broken record? Kiss her. Kiss her. Kiss her! And then when that magical moment finally happens you were sure that the results of such a tender moment, an achingly sweet kiss would surely cause you to combust? This book is all of that and more for me. And that first kiss between Aimee and Miles is the result of this paragraph and me having to pause, set my Kindle aside and put that kiss into words as I try to come down from that high you get, that romance high, when you're ready to burst from the sheer swooniness of it all. Oh how there is sometimes nothing on earth like a good young adult romance. I'm just barely past the halfway mark as I'm writing this right now but I could swear that my heart already feels like it's consumed in flames, and has been, since pretty early on.

I feel like Ophelia London did a really good job at capturing the teenage voice. Aimee's character was absolutely adorable. She has this sort of sweet innocence about her and I thought it was cute how often and how easily Miles could make her blush. I swear to you I was grinning every time. She was so much fun. I loved the fact that she was around before Miles got famous and was crushing on him long before he became the Heartthrob. Her crush/attraction to him felt more genuine and sincere that way. She was the best friends tag along little sister. I love those kinds of romances.

As for Miles, well, swoon worthy doesn't even begin to describe him. Is it creepy that even at my age I'd be a part of the Miles High Club in a heartbeat? Yeah, I didn't think so either. This guy was so, so sweet and funny. Oh and British. Did I mention the British thing yet? Sigh. Yeah, there's just something about a cute British boy with a guitar. The thing about Miles is that he's flawed and he's coping and dealing with things he's done in his past and battles internal demons on a daily basis and I think watching him struggle to control certain things within himself internally just made me fall all that much more for him.

It's books like this one that really go to show that sometimes a very innocent and sweet YA romance can be a million times hotter and more swoon worthy than anything I could read in something more adult or NA. For example that kiss I was talking about in the opening of my post? That's all it was. A simple kiss, granted it was a long one though. It wasn't some heavy make out session with roaming hands and tongues. It was just a sweet, innocent kiss and yet the feelings it inspired were almost overwhelming. Maybe it's just the fact that they remind us of those wonderful and intense feelings associated with first love. The kind that make you feel like you can't breathe and are almost painful in a good kind of way. Aimee and the Heartthrob did an amazing job of expressing those feelings. Especially since it alternated points of view so we got to see both sides of the relationship and seeing Aimee through the eyes of Miles made my heart...well throb for lack of a better word.

I'm very excited to read books about the rest of the boys in Seconds to Juliet. Especially Ryder who it looks like is coming up next. He kind of seemed like a huge jerk through a lot of the book but the way he comes out in the end has me thinking that he's got a few redeeming qualities in there somewhere. Though I am kind of nervous at the same time because Ophelia London did such an amazing job opening up this series and I notice that it's going to be a group effort. I've never read anything before by Lisa Burstein, who is doing Ryder's book, but I guess I'll just have to wait and see.

Basically I adore this book to pieces and I highly recommend it to anyone who would love a very cute and very sweet YA contemporary romance. Trust me, by the end you'll want to be part of the Miles High Club as well! I think I used innocent and sweet way too often in this post but I don't even care. Give it a read and you'll see!