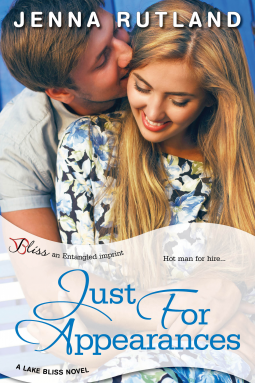 Rachel Clarke is a single mom with three boys, and she needs help. Now. Unfortunately, her only option is John MacDonald-her high school sweetheart and the disgraced hometown hero who's just returned to Lake Bliss. He's perfect for the job. He cooks, he cleans, and he's amazing with kids. He's also still far too sinfully hot for Rachel's comfort...

Rachel is just as gorgeous as John remembers. But in order for his new youth activity center to be a success, John needs Rachel's help to earn the town's trust back. In exchange, he'll take care of her boys for the summer while she works. Except keeping their relationship strictly business is harder than he imagined. But summer can't last forever, and when it ends, so will their arrangement-and John's time in Lake Bliss.

There's nothing like a good second chance romance and Just for Appearances was just that. It was very sweet and full of surprises. I wasn't expecting to like it as much as I did. I mean, I expected it would probably be cute and sweet and I'd enjoy it but not to the point where I hardly did anything else until it was finished. Thankfully it was short enough that I could gobble it up in one sitting.

I love when books are set in small towns. Lake Bliss seems like one of those quaint, peaceful communities where everyone knows each other and they really care about one another. It's these types of settings that have me really get lost in the atmosphere of a book and daydream about what it would be like to be a part of something like that. The grass is always greener, am I right?

With the whole single mom angle I felt very connected with Rachel's character. Though she has a whole lot more on her plate with her three boys compared to my one, still it was easy to like her and really understand her and her feelings. On top of being a great mom with three very sweet and well behaved boys I really admired the fact that she wanted to do something with herself and got this really great job in an effort to be less dependent on her ex, who by the way is a real piece of work.

And then there was John who was such a good, good, good guy. Like, I cannot stress enough how good of a guy he is. He has such a big heart and he's amazing with kids and like, the fact that he came back to a town that basically turned their backs on him when he was a teenager to build a community center for kids? I mean, come on! What kind of person would be that thoughtful and that and giving under those circumstances? That's a rare type of person and I was definitely in full on swoon mode over him!

All of that said there were a couple things that bothered me when they came up. One just seemed strange and didn't seem like it fit while the other just bothered me personally and might not be a big deal to others. So the thing that didn't fit was the reason that everyone is holding a grudge against John. It was something that happened when he was a junior in high school for crying out loud and I guess I shouldn't give the specifics for spoiler type reasons but it just made no sense to me that that an entire town would get their panties in a bunch over something that wasn't even bad. I will honestly stress that he did nothing illegal or morally wrong or anything of that nature. So a couple of the times he was out in public and dealing with someone in a restaurant or in a hospital they would start making snotty comments about him leaving I would nearly lose it. It was just so childish and stupid of these people and I couldn't stand it. Luckily there were only a couple instances and I'd forget about them when they were over and I read on but after finishing they're still there and make me mad.

The other thing is just personal for me. If I understand how it was laid out, when Rachel was a freshman in college she needed to make some extra cash and so she put out a tutoring add which John's parents answered. He was a junior in high school. And the tutoring led to them dating. He was only a junior and let me say that as the mother of a high school senior and him being a year older than John was probably at the time I would have a problem if I found out he was dating a college chic. Is it a double standard? I don't know, maybe? I'd like to think if I had a daughter instead I would still feel the same way. I guess I just felt less comfortable about their past than I had originally once I read that. But seeing as how this book isn't set back then and they are now both very together and great adult characters I didn't allow it to effect how I felt about them in the present. Maybe it's silly, but it's just the overprotective mom in me I suppose.

Overall it was a very sweet and quick read. The characters were fun and the setting was peaceful. I notice that I have the first book in this series on my Kindle so I'm excited to make time for it one of these days. I liked what I saw of Dani and Matt when they made appearances in this book so I look forward to reading how they got together.