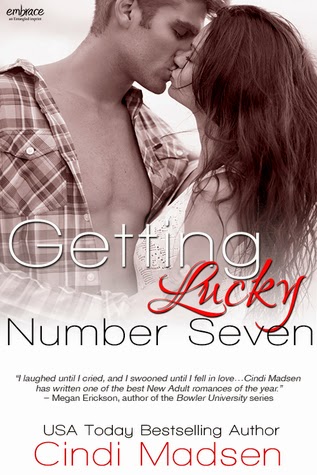 Lyla Wilder is done being the shy, chemistry nerd extraordinaire. While every other college student is out having fun, Lyla is studying. With her cat. Well, she's played it "safe" quite enough, thank you. So she creates a "College Bucket List" with item #7 being a night of uninhibited, mind-blowing sex...

But she needs some help from her man-whore best friend.

Hockey player Beck Davenport thought Lyla's transformation would be subtle. Man, was he wrong. With every item she ticks off, Beck finds himself growing seriously hot for his sweet, brainiac best friend. And if he's not careful, he'll end up risking their friendship in order to convince Lyla that he might just be her lucky #7...


Basically the title of this one caught my eye, it was catchy like that, and then I saw Cindi Madsen's name attached to it and I instantly put in a request. I've read a couple of her books in the past and loved them to pieces, so there was no question, she wrote it, I wanted to read it. I think the bookish universe is trying to tell this non-hockey fan something, because twice now this week alone I have picked up a book where the main guy happens to be a college hockey player and I've loved it. From start to finish this book had me.

Lyla was completely adorable and awkward. And when I say awkward I mean awkward, but in this incredibly endearing way. Her social skills were cringe worthy. From her totally corny jokes to her nervous word vomits about her cat, Einstein, I couldn't help but wonder how on earth she landed a guy like Beck as a best friend. I guess that just goes to show how awesome he is though. But Lyla was such a fun character. I loved the fact that even though she made herself over outside and a bit on the inside, she was still that same adorably nerdy Lyla, just with more confidence and happier. Her makeover and bucket list really helped her discover who she was deep down and helped bring that girl to the surface. By the end I felt like she was the perfect blend of old and new Lyla. I guess what I'm trying to say is, I never thought that she was doing everything for the wrong reason. She wanted to be more bold and try new things. And she did, and if she didn't like the thing she wouldn't do it again but she was happy and proud of herself for at least trying it and discovering something about herself she didn't know before.

It probably isn't any big surprise that Beck is one of the newest guys to be marked down on the book boyfriend list for me. A guy who puts someone like Lyla above anybody else, even before anything happened with them, before the makeover, is pretty freaking amazing in my book. He was protective of her and basically even put her happiness above his own needs, so to speak. All I could think when I saw that was...wow. Okay granted nothing happened between them and it was strictly a best friend situation between them until after the makeover. But I feel like deep, deep down there was always something there and he just didn't recognize it. Just in some of his gestures and the way he took care of her. Some may argue it could've been in a brotherly way but I don't buy that. It's the little things that speak the loudest to me. He's not a big shallow jerk is basically what I'm saying and I was rooting for Beck and Lyla instantly. I mean he not only gets her corny jokes, even the sciencey type ones, but he thinks they're cute. Beck is pretty darn perfect!

The biggest reason I will grab a book by Cindi Madsen without even reading a blurb, besides the great characters she creates, is she's so freaking funny! With this book it was in the banter not only with Beck and Lyla but Beck's sister was really great too. But it was also in some of the situations that Lyla's awkwardness created. I feel like the night she goes to her first party and the, what I can only describe as verbal diarrhea, that comes out of her mouth with the first guy who approaches the new and more boldly dressed Lyla is worth reading this book alone. So. Freaking. Funny. Like I wanted to sit back and laugh and then just pull her aside and say aww honey no. No, no, no, no.

I think if I were to grasp at straws for things to complain about I would just have one that even in the grand scheme of things days later it isn't bugging me that much at all. But I'd have to say that, while things weren't perfect by any means and Beck and Lyla weren't this blissfully perfect happy couple. Things were very comfortable and good, if not confusing for the both of them, for quite a good chunk of the book. The moment where the crap hit the fan came in very late, at least in my opinion, within the book and there wasn't a lot of time to let that settle and sink in before it was all better. There wasn't enough time for that feeling to lay any sort of seeds of doubts that things could even be fixed. Granted I will say that Beck's grand gesture was pretty perfect for this story and I was grinning from ear to ear. That wasn't an issue. I guess I just felt like it was almost a rush from things are okay --> now they're really, really bad --> okay let's all live happily ever after. I know it's a ridiculous thing to complain about, but like I said it was a grasping for straws type of thing.

Truly, when it comes right down to it, this book was pretty freaking great. Another one that Cindi Madsen has knocked out of the park, in my opinion. I mean best friends falling in love and  on top of that it's the nerdy, awkward girl and the college hockey star, it's the perfect recipe! I cringed with laughter, it broke my heart a little bit, and it was all kinds of steamy and sweet all rolled into one! I would definitely recommend getting your hands on this one. Or any other of her books for that matter if you haven't read one yet!