ARC REVIEW: Abby and the Cute One (Backstage Pass #5) by Erin Butler 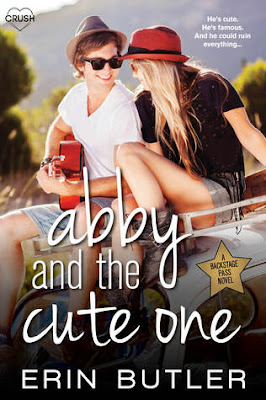 He's cute. He's famous. And he could ruin everything...

Every member of Seconds to Juliet has a girlfriend-except for Nathan Strong. Now the band's manager is leaning hard on "The Cute One" to play the role of the band's heartthrob. With the band's sales in decline, it's up to Nathan to keep the fans' fantasy alive.

The plan is to stage a fake relationship and a fake breakup, and then let the fans fight to be the one to mend Nathan's broken heart. Just one problem. There's another girl in the picture-one Nathan can't stay away from. In private, Nathan's stealing kisses with the band's new opening act, Abby Curtis.

If they're caught, no one wins. Abby will be fired, and the band might not recover the success they need to survive. But even with the pressure mounting, Nathan and Abby can't stop themselves from stealing one more touch, one more kiss. And it's only a matter of time before it all falls apart.

I've been following the Backstage Pass series from the beginning. Even though the last two books weren't exactly my cup of tea, I still knew I wanted to see this series through to the end. Though there were a few cheesy moments here and there, I couldn't be more pleased with how this series came to a close. It made me fall in love with each one of the guys from Seconds to Juliet all over again and it was hard to put down.

I was so excited to finally, finally get to know something about Nathan. He's been the most mysterious. I mean, besides the fact that he's "The Cute One" it's really hard to get a read on his personality to this point. If you'd asked me before reading this book, I'd have told you Miles was totally my S2J guy all the way. With Ryder nipping closely at his heels of course. But since getting to know Nathan I'm a Strong girl all the way! He is just so sweet and genuine and adorable. He has this tremendous heart and actually made me cry at one point when he does the sweetest and most thoughtful thing in the middle of the book for a couple fans. I had been slowly losing my heart to him up to that point, but once it happened I was a total goner.

Abby was the perfect girl for someone as thoughtful and giving in nature as Nathan was. I loved how down to earth and grounded she was. And especially the fact that she was every bit as talented, probably even more so, than the guys were. How she knows she has this gift with her voice, but instead of it inflating her ego or having her be driven for fame, she just wants to connect and make people feel the passion that music can inspire. These two are just cuteness overload and perfect together.

One thing that each and every author in this series did perfectly the same, was inspire the deep, deep hatred that I felt towards S2J's manager, LJ. The guy was slime. No. Worse than slime! Ugh I could not stand sitting her in each and every book watching him manipulate and threaten these young men in his power hungry ways. And watching each one of them believe his words. With each book I was hoping at first he'd be fired, but then as the series went on I was picturing bad things happening to him. And liking it. Sigh. I was really hoping he'd get killed off by the end of the series, but alas...that didn't happen. But I feel like Erin Butler got me to hate him the most. She really brought out his evil side! And I couldn't have been more pleased with how she handled the situation.

Sure, like I said, there were moments of real cheese, but they're 16 years old. I remember things being cheesy and overly dramatic at that age. Regardless, I really thought the romance was sweet and loved the connection between Abby and Nathan.

I had such a fun time reading this last book in the series and now that it's happened I'm sad to see it go. Thank goodness Erin Butler came along to finish it up. This was my first time reading one of her books, but after reading this, it definitely won't be the last!

Thanks to Entangled Publishing for the opportunity to read an review this book!