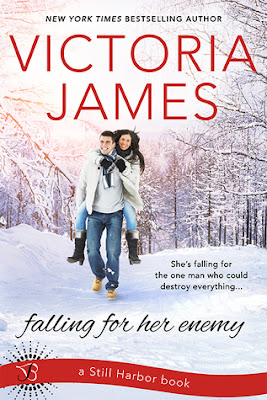 She's falling for the one man who could destroy everything...

Alex McAllister always dreamed of a life filled with the laughter and love of a family, but being abandoned at a young age left her wary of letting anyone in. Now that she's settled in Still Harbor, Alex struggles between keeping her distance and the magnetic pull of the handsome stranger who claims he's the biological father of her adopted daughter.

Hayden Brooks never wanted to be a father. Long hours spent building his family's real estate empire suits him just fine. But when he discovers an ex put the baby he unknowingly fathered up for adoption, his world crumbles. He tracks the child to Still Harbor with the intention of bringing her home-and comes face to face with his daughter's stunning adoptive mother.

The paternity test is in. And Hayden's about to make the most shocking decision of his life, just in time for Christmas...

Sometimes there's nothing I love more than a really emotional book or series. I swear the Still Harbor books are going to be the death of my emotions. I was in a near constant state of tears through almost every point in this book. Although if you read that blurb there's really nothing else you could expect from a storyline like that. The threat of a very happy and sweet family being ripped apart. I loved the way it was written though, for the most part.

So first I'll get to the couple of things that I didn't like before I move on to my praise. First, and I cannot stress enough how much of a oh-please-no-just-stop this is, but this series focuses on three very intelligent women yet all three of them seem to say a phrase constantly, that the way it is spelled in the books, really grates on me. That phrase would be "ohmigod" exactly like that. I just, I don't even know how to explain it. I see that and I'm like why? Why?

The other thing I didn't understand was there's a moment when Hayden is in Alex's driveway waiting for her and he's having a conversation on his phone with a friend. The conversation you read goes something like this:

"Yeah. Which one? Oh you think that's funny?"

All you get is Hayden's side of the conversation. I realize that said conversation literally has no kind of impact whatsoever on the plot so you don't need to know what's being said but the scene was in Hayden's point of view for crying out loud! Why even have that phone call at all without seeing both sides? Why have a long paragraph of one sided conversation? Why not just have him lost in thought or I don't know....anything! It just felt really weird and off and it broke up my momentum because I was chugging along and then I paused to wonder why this was happening.

I mean, I realize that both of these things are not anything major and I'm pretty much nitpicking, but both ended up breaking up my reading flow.

On with the praise. I feel like, as a mother myself, it was extremely easy to slip myself into Alex's shoes and truly sympathize and feel everything she was going through. When I tried to imagine someone possibly taking my son away from me I understood how very real Victoria James wrote Alex. She did such a good job with her character and Alex is definitely going to be my favorite of this series. She's just this really amazing force of good and I wish that more people in the world could be exactly like this woman. It'd be a much better place that's for sure.

While, by the end, I loved both characters, it took me a bit longer to warm up to Hayden. He comes off like this elitist snob most of the time. Looking down on public schools and things of that nature. But he did have moments of extreme sweetness and this natural fatherly connection to little Cassy that melted my heart and made it difficult to hold how he was raised against him.

Since I've already written a novel here myself I'll wrap this up by saying that, sure, there were a couple of things that annoyed me, but I just love this series. It's sweet and emotional. The romances will leave you swooning and breathless. I'm not sure how my heart will survive the last book, but I can't imagine it being more emotional that this one but really good all the same. Of course I thought that about the first book as well so...I still can't wait to read it!

Thanks goes to Entangled Publishing for the opportunity to read and review this book!