ARC REVIEW: His Pirate Seductress (Love on the High Seas #3) by Tamara Hughes 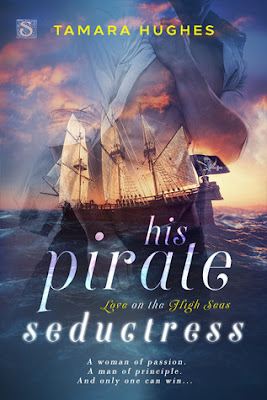 A woman of passion. A man of principle. And only one can win...

With her son's life in the balance, Catherine Fry is forced to locate and steal the priceless Ruby Cross of the Knights Templar. She knows who has it—it's just a matter of coercing Thomas Glanville, the handsome and incredibly stubborn captain of the ship she’s captured, into telling her the exact location. Fortunately, Catherine knows that there are many ways to get a man to talk...

Captain Thomas Glanville has the cross and he'll be damned if he's going to hand it over now that he finally has the means to buy a ship of his own. He's at the mercy of a fiery woman who will stop at nothing to achieve her goal. But Catherine has no idea who she's dealing with—and Thomas has his own means of charming a woman into his mercy and his bed...

Even with my love of Historical Romances, I never thought that I'd be one for the swashbuckling and danger on the high seas. I really didn't think pirates would be my thing. Okay, sure. I admit that I may have had a fantasy or two about a certain captain with an affinity to rum and a very bird-like name but come on....Johnny Depp. Anyway. When the first book in this series, Tempting the Pirate, came across my path, the little book devil that sits on my shoulder and pressures me to read ALL THE BOOKS, was like "you really need to read this book." Well I listened. I've been hooked on the Love on the High Seas series ever since. With this addition to the series, and the promise of a female pirate I was the most excited I'd been to step into this world and lose myself. While it took me a minute to really get into the story, once I did I fell just as hard for this one as I did both it's predecessors.

I think the reason it took me a few pages to truly accept the storyline and get into the flow of things and really enjoy what I was reading was the fact that Catherine was more of a reluctant pirate. It definitely wasn't a choice or something she sought doing. I kind of went in blind because I prefer it that way when I'm working my way through a series. So I guess I was expecting more of a fierce, tough as nails woman. While she had strong, stubborn streaks she wasn't what I had pictured in my mind I was going to find. Once I embraced the story though, I think this is a very good thing. I don't think I would have found the romance between the type of woman I was expecting and someone as stand-up and alpha-ish as Thomas very believable. It ended up being more fun than I had been hoping for anyway!

Though I do feel like the previous book had more of a heart pounding intensity and danger to it, this one still had quite an edge of danger on it's own. Definitely enough to keep you turning the pages and make it nearly impossible to want to put it down.

There has been such a fun variety of characters within this series. They're all very well written and complex. Plus Tamara Hughes always does a fantastic job at making you feel as if you truly are on the high seas or sucked back in time. It's fantastic.

If you love Historical Romance and haven't read any pirate books before, but are curious, I highly recommend giving this series a go. They are so much fun and filled with banter, breathtaking romance, heart stopping danger and sexy swashbuckling men (and women). I've thoroughly enjoyed the Love on the High Seas series and can't wait to see what Tamara Hughes has to bring us next!

Huge thanks goes to Entangled Publishing for the opportunity to read and review this book!