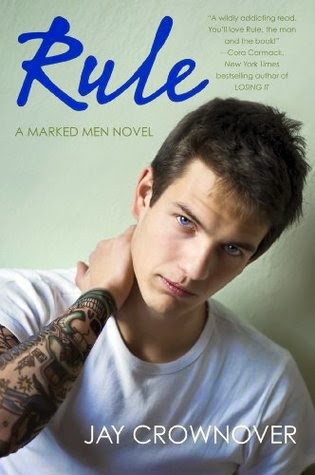 
Opposites in every way . . . except the one that matters

Shaw Landon loved Rule Archer from the moment she laid eyes on him. Rule is everything a straight--A pre-med student like Shaw shouldn’t want--and the only person she’s never tried to please. She isn’t afraid of his scary piercings and tattoos or his wild attitude. Though she knows that Rule is wrong for her, her heart just won’t listen.

To a rebel like Rule Archer, Shaw Landon is a stuck-up, perfect princess-and his dead twin brother’s girl. She lives by other people’s rules; he makes his own. He doesn’t have time for a good girl like Shaw-even if she’s the only one who can see the person he truly is.

But a short skirt, too many birthday cocktails, and spilled secrets lead to a night neither can forget. Now, Shaw and Rule have to figure out how a girl like her and a guy like him are supposed to be together without destroying their love . . . or each other.

This series has been on my TBR list for far too long. I don't even know why it took me so long to buy them. Tattooed boys are my biggest weakness so you'd think I'd have been on it even before I read the summary and had only seen the cover! A little over a month ago I was just sitting here and I wasn't doing anything book related so I couldn't even tell you where it came from, but I had the sudden urge to finally buy and start reading the Marked Men series. Best decision ever.

I sabotaged relationships, turned down guy after guy simply because I didn't want a good guy--I wanted the one who was damaged and blind to the way I felt.

You cannot help but love Shaw Landon. She's this girl that makes you instantly feel the need to protect her. By all accounts she should be a spoiled, snobby little rich girl. But the reality of it is she's unbelievably sweet and loving and caring. Her biggest fault though is that she has a hard time for most of the book standing up for herself. She'll stand up and fight for everybody else, most especially Rule, but when it comes to standing up to people in her own defense she shuts down. Normally that sort of thing has me liking a character less, but even though I got annoyed my feelings for Shaw never wavered.

I didn't bother to cover up; she was used to walking in and finding me hungover and naked--I didn't see why today should be any different.

Meeting Rule Archer for the first time was...a unique experience haha. It was equal parts shocking and humorous and on top of all that highly intriguing.  Even after that initial crazy first impression, there was something about the guy I instantly liked. Sure he was full of attitude, really didn't think about anybody but himself and was a bit of a male slut, okay maybe 'a bit' is something of an understatement, but I had hopes for him. The more I got to know Rule and about his background and the family dynamic he grew up in, the whole bad boy thing and his attitude really clicked for me. Plus I started to see what Shaw saw in him...and he stole my heart as well.

"...Just look around you: I'm still here, Nash hasn't gone anywhere. Jet and Rowdy would kill for you, and if you took a minute to think about it, Shaw has been there just as long..."

What I love most about this series, I've read Rule, Jet and Rome at the time of typing up this post, is how much of a tight knit group these people are. It's not even friendship they're a family. If you hurt one you hurt them all, if you piss off one you piss off all. They protect each other and would do absolutely anything for one another. Sure they fight and argue among themselves as well just like a normal family unit would, but you know that even when they're at each other's throats there's still this deep, unbreakable bond. It's heartwarming. You're slowly getting to know everyone in each book and it has me excited to get to each guys book and see each of these bad boys get his world turned upside down by a girl. I only wish I would have started these books sooner!