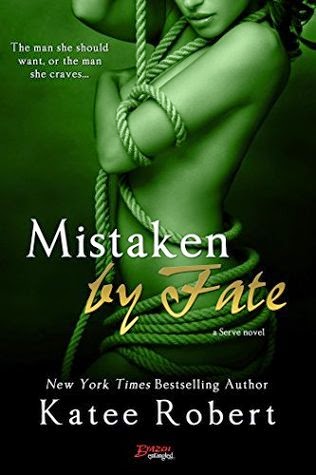 Former soldier Garrett Reaver hasn't ever gotten Ridley out of his system. And now that she's before him in all her submissive glory? He'll be damned before he lets someone else have her, especially his brother. Because Garrett and Ridley have some seriously unfinished business to take care of, and it starts now. And this time, he'll show Ridley how exquisite a relationship with him could be…if their past doesn't catch up to them first.

I've really been enjoying the Serve series so far. Reading these next two books in the series though, had me both nervous and excited. Nervous because books three and four are by a different author and I haven't read anything by her before this. Yet excited because this gives me the opportunity to, hopefully, find a brand new author to get into. Now after reading Mistaken by Fate I can safely say that Katee Robert was the perfect person to add to this series. Before I put a dent in it I was already grinning from ear to ear and now I can't wait to pick up the ARC I have for the next book in the series, also by Katee Robert, Betting on Fate.

I instantly fell in love with all of the characters in this book. Ridley was a great main character. She's very together, has a career she's passionate about with an opportunity to make it big, great friends, she's sweet and funny and spunky...the only thing missing is the romance. Garrett was, well the only word that instantly comes to mind when I think about him is yum! I have a thing for the alpha males and Garrett was about as alpha as they get. He's flawed and has a job that has the possiblity to throw him in danger so he's very hard and tough, but there's a sweet side to him, at least when it comes to Ridley that steals your heart. He's probably my faovorite guy from this series so far.

The other two key characters in the book were Garrett's siblings who added a lot of fun to the story as well. I loved how both Sara and Will were always in a way pushing Ridley and Garrett together. It was like everyone but them could see, and had been seeing for years, the feelings and sparks going on between these tow. Getting to know them a bit also has me also looking forward to the next book even more which happens to be Garrett's twin brother Will's book. It was hinted quite a bit while reading this one that Will has a bit of a darker side so it will be interesting to see how it all plays out.

I've loved all the books in this series so far and like I said Katee Robert did an excellent job with keeping up the same vibe that I got from reading the books by Tessa Bailey. I will without a doubt be picking up more books by her in the future!