The summer is warming up with two new releases from Bliss this month.  One is our latest Red-Hot Bliss, Her Secret, His Surprise by Paula Altenburg, which throws the bedroom door open. The second is a traditional Bliss, Accidentally Married on Purpose by Rachel Harris, which while it's a behind closed doors story it's definitely not lacking in sizzle.  Plus, Seven Day Fiance by Rachel Harris is on sale!  See below for more details. 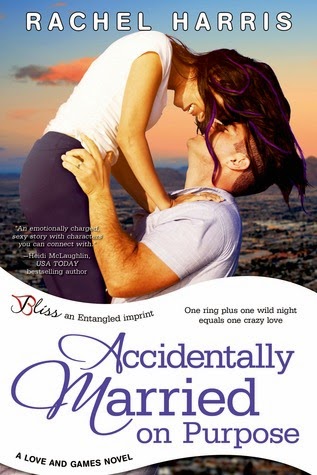 About Accidentally Married on Purpose:

One ring plus one wild night equals one crazy love
Sherry Robicheaux loves men. She loves love. And she loves an adventure. So when she meets a mysterious man while working backstage at a country music concert in Vegas, she’s all about what happens in Vegas staying there.
Country music superstar Tyler Blue just wants a weekend of anonymity…though there’s something about the spunky waitress with the streaks of purple hair that tempts him like no other. Until the next morning, when they both wake up with fuzzy memories…and rings on their fingers.
Convincing Sherry to maintain the ruse for his public image isn’t the hardest part—it’s reminding himself that their time spent playing husband and wife in her small town of Magnolia Springs can’t last. Tyler’s first love will always be music—and the road is no place for a sweet downhome girl.

On sale for $.99 for One Week Only!
Add it to Goodreads
Follow the Accidentally Married on Purpose Blog Tour

About Her Secret, His Surprise:

Conflict of interest is an understatement…
Since being disowned by her strict father, Cass Stone has spent her adulthood trying to prove him wrong. Her drive has led to more success than her family ever thought she’d achieve, and life is looking great. Not even an incredible and mysterious one night stand that leaves her a single mom can trip her up...until the father of her baby stumbles back into her life, as sexy and unreliable as ever.
Logan Alexander hasn’t forgotten the night he spent with Cass two years ago, but he never expects to end up undercover as her assistant. His job saves lives—like it should have saved his brother—and he can’t afford complications. It’s difficult enough to maintain his cover as a carefree wanderer when he realizes his attraction to Cass hasn’t faded...and then he meets Cass’s daughter.

On Sale for just $.99 for One Week Only!
Add it to Goodreads
Follow the Her Secret, His Surprise Blog Tour

Pick up a copy of Seven Day Fiance this week only for just $.99!

One bad boy. One good girl. One unforgettable week.


Angelle Prejean is in a pickle. Her family is expecting her to come home with a fiancé—a fiancé who doesn’t exist. Well, he exists, but he definitely has no idea Angelle told her mama they were engaged. Tattooed, muscled, and hotter than sin, Cane can reduce Angelle to a hot mess with one look—and leave her heart a mess if she falls for him. But when she ends up winning him at a charity bachelor auction, she knows just how to solve her fiancé problem.


Cane Robicheaux is no one’s prince. He doesn’t do relationships and he doesn’t fall in love. When sweet, sultry-voiced Angelle propositions him, he hopes their little fiancé game can finally get her out of his head. He doesn’t expect her to break through all his barriers. But even as Angelle burrows deeper into his heart, he knows once their seven days are up, so is their ruse.

Pick up your copy of Seven Day Fiance before it goes back to full price!
Add it to Goodreads