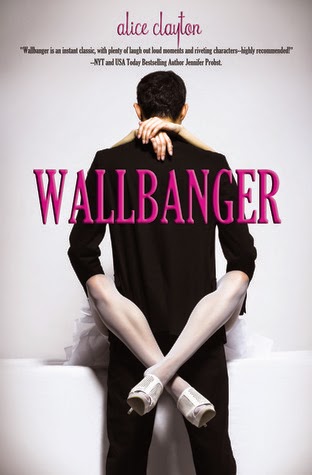 The first night after Caroline moves into her fantastic new San Francisco apartment, she realizes she's gaining an intimate knowledge of her new neighbor's nocturnal adventures. Thanks to paper-thin walls and the guy's athletic prowess, she can hear not just his bed banging against the wall but the ecstatic response of what seems (as loud night after loud night goes by) like an endless parade of women. And since Caroline is currently on a self-imposed dating hiatus, and her neighbor is clearly lethally attractive to women, she finds her fantasies keep her awake even longer than the noise. So when the wallbanging threatens to literally bounce her out of bed, Caroline, clad in sexual frustration and a pink baby-doll nightie, confronts Simon Parker, her heard-but-never-seen neighbor. The tension between them is as thick as the walls are thin, and the results just as mixed. Suddenly, Caroline is finding she may have discovered a whole new definition of neighborly...

In a delicious mix of silly and steamy, Alice Clayton dishes out a hot and hilarious tale of exasperation at first sight...

Well, you get my point. I discovered Wallbanger probably a year ago or so and, I can't remember why, but at the time I had to pass it up. Probably a self-imposed book buying hiatus or something. I remember chuckling at the title and pulling it up. Before I even read the description I had a gut feeling it would be hilarious, sexy and absolutely perfect. Thankfully, I was right. When Gut decides to speak up, it never usually steers me wrong. I sort of forgot about it until a few weeks ago when I was feeling the itch to buy a new book and it just popped into my head and wouldn't leave. "You must buy Wallbanger..."

It should be noted that LC (Lower Caroline wanted a hip but abbreviated name) had somehow drafted Simon's penis into the fray, and even though his penis didn't have direct access to her yet, LC felt it necessary to speak up on his behalf.


It's not often that I really and truly love the FMC. I mean I'll use phrases like "Yeah, she's great, loved her, blah blah" But deep down it's usually just a solid like. But Caroline? Freaking. Loved. Her! The funniness that came from her, especially from her inner monologues, was just too much some times. I mean she refers to major parts of her body as if they were living, breathing people she was having conversations with for crying out loud. It wasn't 'my heart thought this' it was more like 'and then Heart had to go and get involved too!' There was Heart, Brain, Lower Caroline (I'm sure you can figure that one out), Nerves, Backbone and we can't forget O (yeah, that O...)

"Fucking Wallbanger," I hissed, frozen on the spot.


But it wasn't just her humorous side that made Caroline such a delight to read. For the most part, she really has it together and knows what she wants out of life. She has a career, that she's good at and loves doing. She's very confident, in most areas in her life. But not in that annoyingly arrogant way. She has her insecurities as well. Mostly due to a couple of 'real winner' types of exes. She's independent and doesn't need to rely on a man to bring her happiness. And she knows her self worth and is smart enough to hold out for what she knows she deserves. No matter what the temptation may look like...


Then there's Simon. Holy freaking yum. This guy is just all kinds of sexy. I think had I been Caroline, listening to the pounding wall night after night, I would have snapped and gone next door to punch him. But then when he opened the door probably would have ended up pouncing on him instead. And he becomes sexier every time you learn even the tiniest new thing about him. He travels the world as a photographer. When he talks about his family you melt on the spot. Even his appreciation of food is funny and adorable. And he's not an asshole. Outwardly if you were just to see him you'd probably think male slut, jerk, whatever. But once you get to know the Simon on the inside of the delicious package, he's this genuinely great guy.

"Clive, stop it, you asshole," I moaned, hiding my head under the covers.


Alice Clayton definitely has the ability to write brilliant characters that really drive a book. Every single character in Wallbanger is so full of life and so much fun to read. Even down to Caroline's silly cat named Clive. I swear Clive deserves a book of his own! I love it when you don't just fall for the main characters. When even the secondary ones are memorable. Not everyone can do that.

"I've never seen a woman who could take so much in one sitting," he marveled, watching me come undone once more.


There were so many chapters that would start off hinting at one thing, when deep down you knew that what it seemed like, really wasn't what was happening. Pure innuendo bliss. I laughed out loud so much. Because the things they'd be arguing about or discussing were just completely "whoa..." Yet I knew in reality they were more than likely discussing food most often.

No woman has ever done breakfast bread foreplay the way you do.


For the majority of this book we're in Caroline's POV. There were a lot of fun moments where you'd have nothing but pages of text messages back and forth between any number of the characters. Caroline and Simon, Caroline and one of her friends Mimi and Sophia, Simon and one of his friends Neil and Ryan, and numerous other combinations. So you really got to see a lot of personality from everyone. But briefly we also get a revolving set of inner monologues between 4 of the characters. Simon and Caroline included. You really need to read it to fully appreciate the awesomeness this is. Seriously, I can't even begin to tell you how much fun this book is!

He was wooing me. And I was letting him woo. I wanted the woo. I deserved the woo. I needed the wow that would surely follow the woo, but for now, the woo? It was whoa.


From the brilliantly fun characters, to the hilarious, sexy, heartwarming storyline, Wallbanger is one that shouldn't be missed. I laughed. I sighed. Mostly, I grinned like an idiot. The only thing I'd change about it would be the fact that I waited so damn long to read it! And now I'm going to stop fangirling and go look into getting a physical copy. Yes, I own it on my Kindle, I'm a book hoarder!