ARC REVIEW: Bind Me Before You Go (Serve #8) by Harper Kincaid 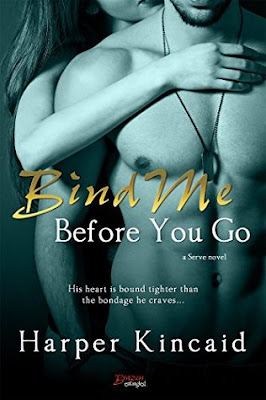 His heart is bound tighter than the bondage he craves...

Security expert David Cavill has more secrets than any man should. Secrets that forever shut down any possibility of love, marriage, or family. Yet Cassidy draws him in, an intoxicating combination of strength, candor, and sensuality that David can't resist. But as their bond deepens, Cassidy must decide if she can love a man whose heart is bound tighter than the form of bondage he craves...

I have so much love for Entangled's Brazen line. They are short, quick reads with a lot of feelings and a lot of naughty. The perfect thing to pick up when you want to get through something quickly, a nice little appetizing snack to whet your whistle. I think, in a way, that was sort of a negative when it came to Bind Me Before You Go. Don't get me wrong, and don't let that 3 star rating fool you, I loved this book, the characters and the storyline. I just feel like, had there been opportunity to really flesh out this book, add a couple hundred pages. really expand on David and Cassidy's back stories this book could have gone from great to amazing. As short as it is though, everything is crammed in and just happens like bam, bam, bam with no time to breathe and truly absorb.

As far as I can remember from the past 7 books in the Serve series, I'm pretty sure that both David and Cassidy are new characters in this world. I really liked both of them though. A lot. They have these very heart wrenching back stories. Things from their past that could easily break the best of people, probably would have broken me. But these two are survivors. They've both found their own ways to cope and to retreat into themselves. I wanted more of that. More of what had made them the people they were today, instead of the quick explanations. More of David dealing with his brother and Cassidy dealing with her past as well.

The one thing I could find no fault in was the incredible chemistry between these two. When they would come together there was this rightness between them. And this nearly tangible heat. Made me want to find the nearest object and attempt to fan myself with it! So much yum!

Though I guess I shouldn't have said I found no fault because if I had one complaint it would be that, once again, it all happened too fast. Too quickly Cassidy opens up to David. Too quickly and easily they could just read each other and know what the other one needs. Too quickly they fell hard. So, yes. It was pretty insta-love in a lot of ways. Yet that didn't really bother me or leave me frustrated, deep into the eye rolls. There was just too much sweetness to them.

In the end, yes, everything happened at warp speed and wasn't as drawn out as I would've liked for it to have been. But by the time I was done reading it really didn't matter because the characters still stole my heart and made me feel for them. I would definitely read more from Harper Kincaid in the future!