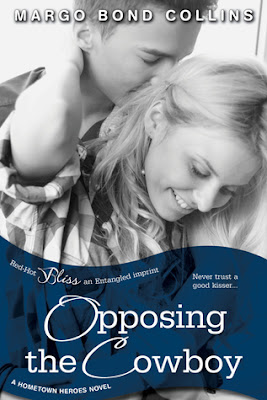 Yoga teacher LeeAnn Walker has no desire to see the unspoiled beauty of her grandmother's ranch violated by a greedy oil company. But unless she finds the paperwork confirming she owns the mineral rights, that's exactly what could happen. The worst part? The guy spearheading the whole mess is none other than the hot and sexy stranger LeeAnn just kissed to make her ex jealous.

Jonah Hamilton thought his day was looking up until he found out the gorgeous blonde who kissed the hell out of him is the same stubborn woman he came to town for. And she's not too happy to find out she might be forced to allow drilling on her land.

But Jonah has a job to do, even if LeeAnn tempts him to turn his professionalism into something much more personal...

Cowboys are a huge weakness for me, to a point where if I even see the word in a book title I will gravitate towards it and want to read it not even seeing what it was about. Sometimes it works out for me and sometimes it doesn't. I can't seem to figure out exactly where Opposing the Cowboy fits in that situation though. There were just as many things that I liked as ones I didn't. It's just sort of steady there on the edge.

My feelings seem to be split on everything. Like the characters for instance. LeeAnn was a really good character. She's passionate, has a huge heart and can be so sweet and quirky. One of her quirks though started to drive me crazy after a while. Her spontaneous nervous yoga habit. I think there were maybe 2 scenes tops that she was in where something didn't stress her out or make her nervous and she didn't start breaking into yoga poses. Since she's the main character I'm sure you can guess this book was full of yoga.

Then on the other hand there's the cowboy, the reason I picked up this book to begin with. Jonah was the real deal, tight jeans, Stetson, boots and manners. Yep he had that southern gentleman thing down pat! There were times though his thoughts felt more like they'd be coming from a female as opposed to a rugged cowboy type. Like his thoughts drifted into "sweeping her into my arms" on more than one occasion and I don't know maybe it's just me but I can't see someone like him thinking things like that. "Pull her up against me" sure but no sweeping. But really that wasn't bad and I could live with that except I disliked how he would constantly think of LeeAnn as irresponsible and flaky. And I don't mean in this oh-it's-so-cute-how-flaky-she-can-be-sometimes type of flaky and irresponsible. It was always in a very negative capacity. It made me have a really hard time viewing any "romantic" feelings he had towards her as valid.

One thing I really enjoyed without any mixed feelings was the bulk of the storyline in general. The big bad guy from the oil company going up against the yoga teaching vegetarian over drilling rights. That is what truly kept me plugging along. I was highly interested to find out how any of that would get resolved. And of course to figure out how people from two vastly different sides of such a serious type of a situation would be able to get past their differences and come together in the end. I was actually pretty pleased with how that whole thing turned out. Truthfully it came together better than I could have thought it was going to.

So, yes. There were things that drove me bonkers and things that didn't. In the end I did enjoy parts of it. I'm tempted to go back and read the first book because, while I'm not sure how I totally feel about Kylie, Cole seemed like he would be a fun character to get to know. I guess we'll just have to see! I mean, I feel like this is definitely one to give a try, I'm sure some of the issues I took with the book were just my own silly pet peeve types of things that stopped me from fully embracing it. I'm sure lots of you would have better luck with it than I did. And hopefully you do!