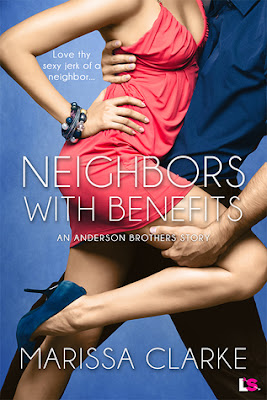 Love thy sexy jerk of a neighbor…

CEO Michael Anderson might be something of a “control freak.” Still, he’s not quite sure why his therapist thinks dog sitting will fix anything—especially since he and the canine share a kind of mutual loathing. And to make matters worse, a house sitter moves in next door disrupting his peace—and his dates—with the worst possible music at the worst possible time... every time.

Free-spirited artist Mia Argaropolis has settled into the perfect gig—house sitting in NYC’s Upper West Side while working as an art therapist. Too bad she’s stuck living next door to a bossy control freak with a penchant for calling building security when she blasts music to drown out the noises coming through his bedroom wall.

Post-apocalyptic dinner rolls that nearly take her kitchen with them, a douchebag ex, and a Shih Tzu with the personality of Godzilla attack Mia in one day, and her unlikely neighbor comes to the rescue. Like it was her fault. And now, somehow, they find themselves engaged? Both agree, this neighborly feud just got taken to a whole new level.

Holy cuteness! I absolutely adored this book. It was funny, sweet, filled with sexual tension and I couldn't put it down for a second!

I'm pretty much kicking myself after finishing this one. I remember when the first book in this series came out and I was just sort of meh about it and decided to pass it by. But after finishing Neighbors with Benefits and meeting all three of the Anderson brothers I've realized that I really need to rethink that whole meh attitude. I love the dynamic between the brothers and how each one is so vastly different and yet there's this bond and closeness and they compliment each other well. It's made me really want to go back and read Will's story, which I plan to do ASAP.

I think what made this book so much fun to read was just how deeply polar opposites Michael and Mia were. Michael is very powerful and driven, he's a neat freak and almost OCD in his organization of everything in his life. We're talking to the point where even the pencils and things on his desk he straightens obsessively with symmetry and parallel lines. He's very controlled in every aspect of his life and lives by a very rigid routine. You would think someone like him would be hard to like but it was quite the opposite. It was instant and very easy to like this guy.

Mia is basically everything Michael is not. She's like this artistic, free spirit. She has a tendency to be forgetful and where Michael is neat and organized she is more chaotic and a bit of a mess, but definitely an endearing mess.

It was entertaining watching the chaotic storm that was Mia and Clancy (the Shih Tzu) crash into his perfectly manicured life and home and to see Michael try to cope and adjust to things being out of his control. And on the other hand how the steady and structured influence of Michael brought about changes in Mia as well. The thing with these two characters is they were both great and extremely likable from the very beginning, but the more they got to know each other and influenced each other's lives the great turns to pretty perfect and the likable becomes more like lovable. Separate they were fine but together they were better. I loved it and them.

Overall I had so much fun reading this book. It was a sweet and laugh out loud funny, quick and easy type of read. And now I'm going to rush over to Amazon and pick up the first book so I can devour that one as well!