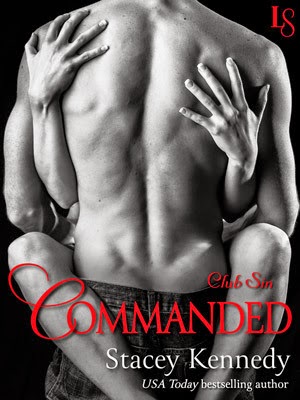 There’s something different about Sawyer: a commanding strength that pulls Chloe into a vortex of heady desire. But when she learns about his double life as a Dom, she’s shocked—and afraid she could never complete him. Then he saves her life, and just like that, Chloe knows she will be able to give him anything he desires. She is his—wherever and however he wants to take her.

I receive a copy of this book, from the publisher, in exchange for an honest review. In no way did this sway either my review or my rating!

I have thoroughly enjoyed getting to know each one of the Masters of Club Sin.  I've loved the mix of lightness and intensity that each of their books has brought. There were things that worked well for me and a few things that didn't, but all in all I think Sawyer's story was the perfect way to close out all the new stories from the Club Sin series.

Each of the Masters has had their own pull, their own little something that has drawn me to want to read each one of their books very badly. With Dmitri he was my first foray into the world of BDSM, he brought something new and exciting to my very skeptical mind. With Aidan, he seemed very serious and controlled, all business, yet I could see the passion and heart ready to break free. And then there's Kyler. Sigh, oh Kyler. Even now, after all this time, I am still totally into this guy. I knew before I even read his book that he was going to be my guy. It was his playful and teasing nature that drew me to him. I think Porter would be a very close second to being my favorite from this series. Anyone who can tame Kenzie was someone I wanted to get to know better, plus his close relationship with Cora, from book two, and the way he looked out for her after all this time was heartwarming.

And then there was Sawyer. Sawyer was still almost a mystery to me from the beginning of this book and that was his draw. He's been around in the first five books of course but not enough to get a real good grasp on his personality and what was going on in his head. I have really loved getting to know his character. He's fiercely loyal and protective, plus, like Kyler, he's a cop so...hello sexy man in uniform! The storyline with his sister's abusive boyfriend kind put a different light on this book. It showed a more human side of Sawyer. Instead of this powerful, controlled Dom you really get to see the guy behind the Dom.

Chloe, well, I feel like I did like her character in the very beginning and even before that from the previous book. But she became a bit of an annoyance for me. She did stupid things and put herself in bad places or situations all in the name of trying to understand Sawyer better. Instead of just talking to him and asking him the questions she talked to everyone but him. It was just frustrating and I guess sometimes I felt like she wasn't the right girl for him because of this.

Even though I had those few moments where I questioned things, still there was a sweetness to Sawyer and Chloe's relationship. I liked how her character stayed true to herself and within her limits and comfort zone.

A huge thanks to Loveswept, Random House for the opportunity to read and review this book!