ARC REVIEW: The Perfect Bargain (How to Marry a Highlander #1) by Julia London 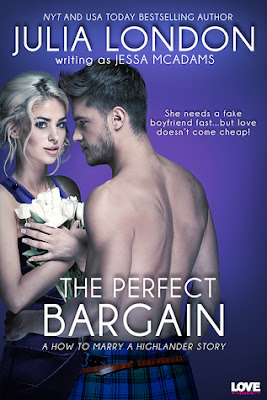 As if being newly single isn’t brutal enough, Sloane Chatfield's friends are getting obnoxious about setting her up. When Sloane insists she's waiting for a certain sexy fictional Highlander to come along, her friends surprise her with a trip to Scotland to find her a new boyfriend. She’d rather have a root canal. But if she can find a Highland hunk to “break her heart” before her friends arrive…

In a remote Highland village, Galen Buchanan is struggling to keep the family pub afloat. Everything is falling apart, he’s running out of money, and now there's an opinionated American lass parked at his best table, driving him mad. But then Sloane asks Galen to be her pretend Highland boyfriend...and offers him enough money to save the pub. It’s only for a few days, he figures. What's the worst that could happen?

The Perfect Bargain was a cute, fun and quick read. I mean when you have a somewhat uptight American girl and a rugged Scottish pub owner and a fake relationship all thrown together? It's just brimming with fun possibilities.

I really enjoyed both Galen and Sloane's characters. Like I said in the opening, Sloane was a bit uptight and closed off in the beginning, but even so I really liked her. It never came off in a negative way. In fact in Sloane it comes off as coming from insecurities within herself, so instead it had this endearing quality to her stuffy and prim side. Plus it was lots of fun seeing this society/city girl adjust to life in the Scottish Highlands, with wandering sheep and cows and being away from all the luxuries of city life she was accustomed to.

How could I not adore Galen? I have a thing for guys with accents and as I read I could almost hear that delicious Scottish brogue. But an accent isn't Galen's only appeal, he's funny, rugged, loves his family and the people of his village. Even loves his pub that's falling apart at every turn. Outwardly he's sarcastic and gruff, even a bit serious. When you take a closer look though you see that he can be all those things, in a very charming way, but he's also got a really big heart.

So I was basically falling in love with this book page after page, until I got a bit past the halfway mark and I lost a bit of that loving feeling. The arrival of Sloane's friends  should have added more fun and shenanigans to the plot, but for me it was just a huge annoyance.

First, it was one of my biggest pet peeves. The characters from Sloane's side of the book, including herself, are all very well off. So as each one of her friends are getting off the bus in Gairloch there was a fashion play by play from head to toe as Sloane went over what her friends were wearing, down to the accessories and labels. I can't even explain why this bugs me so much but when labels start getting thrown around I guess I'm not girly girl enough to appreciate that and instead I'm turned off. I mean, I guess I realize it's probably relevant to these girls because of who they are and them coming from money but it still bugs me all the same.

I may have not been so put off by that originally, but then all it took was a few minutes to realize that her friends were not very nice people and I think it ended up upping that twinge of annoyance. Only one of the three friends was halfway decent. They were all three very high-handed. They treated her as if she couldn't possibly do anything right in her life on her own. Without them holding her hand and telling her how she should feel and what she should  do in any given situation. Obviously she wasn't over her ex because she wasn't interested in any of the men THEY had tried to set her up with back home. I wish I could explain better the situation that made me so angry over her ex but...you know, spoilers. Ugh! They were just horrible! And at one point when Sloane mentions to her friends that she thinks Galen is having second thoughts about their relationship, her friend Paige, the one whom I despised the most, actually has the nerve to say to her that she needs to lock it down with him basically because, and I quote, 'It's not as if guys are beating down your door in Chicago.' Really? Who says that? Not a friend.

Annoyances with so-called friends aside, I really enjoyed the romance between Sloane and Galen. It was worth reading the parts that I wasn't too fond of. It's always fun to see people from two different worlds, which couldn't be closer to the truth in their case, come together and find their place in each other's lives. With these two it was sweet and pretty funny. Sure, it may have been pretty fast and about as close to insta type love that you can get, but that didn't seem to bother me for once. They were just too sweet to let it bother me and the sparks between them were like whoa...

In the end everything I liked outweighed any of the little things that bothered me here and there revolving around Sloane's friends. It was fun, it was sweet, it had me wanting to hop on the next plane to Scotland and find a Highlander of my own! I'm actually looking forward to reading the next book in this series when it comes out! Well, unless of course, it happens to be Paige's book. Though I guess I'd be slightly curious if my feelings toward her could be turned around. I guess I'll have to see what the future holds for this series!