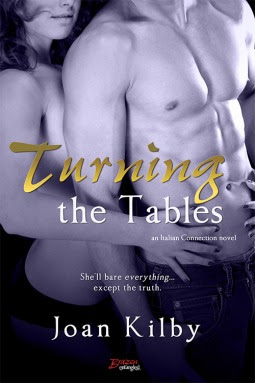 Tina Borlenghi is a billionaire businesswoman, heiress to the Borlenghi fortune, and living la dolce vita. She's also a magnet for men who crave fame and celebrity. So while in New York City launching a new fashion boutique, Tina is more than intrigued when sports bar owner Luke Pederson mistakes her for a sales assistant. He's sexier than sin and only interested in her. What's the harm in a little steamy role-playing?

Entangled's Brazen line is one of my biggest guilty pleasures, oh who am I kidding I don't feel all that guilty about it! They're generally the perfect blend of angst and very hot and steamy. If I'm being honest though, while I'm comfortable giving this 3 stars, I will say that it is more on the lower side of the 3. I wasn't in love with it, I'm not even sure I was in like with it, but I definitely didn't hate it.

The storyline was quite enjoyable. I liked how it lives up to it's title in more ways than one. Normally when you've got a book where someone is hiding who they really are for fear of being used because of money, power, title, influence, whatever reason they have to hide the real them, it ends up being the guy. I liked that Tina is this powerhouse in the fashion industry and comes from this huge family legacy and she's the one doing the deceiving. While Luke isn't free of fame or spotlight himself, he still comes from the more humble background and I could understand Tina's apprehensions but more so from her history because Luke was just too nice of a guy to do anything shady.

I think my major problem with this book lies within the romance. And I guess it's not even necessarily the romance but the sex. I ended up skimming through big chunks of it, most especially when they'd get into their role playing. And it wasn't like in most cases where I skim because there's too much of it or it doesn't fit. In this case it was just...awkward to me. They would start attempting their dirty talk to each other and instead of feeling a zing or a zip of anything I just wanted to get past it. That's not how a Brazen is supposed to make me feel.

A lot of it could have to do with Luke himself too as to why I wasn't feeling the chemistry. By himself he's actually a really great guy. He's sweet and, I mean, any guy who starts a foundation that includes him coaching disabled children in hockey and puts his heart and soul into said foundation is a pretty amazing guy. But there were two things that bugged me once he got involved with Tina. For starters after he'd known her for, oh I don't know, maybe an hour tops, something was brought up about past dating history and he was instantly thinking about how he didn't want to know she had any kind of history at all until that moment. It was all very caveman for such a brief introduction. That along with the fact that he was just so pushy to get her to go out with him moments later. I mean, I think she turned him down about 4 times in 5 minutes. It was all kind of a turn off for me in the romance department.

I'm not too sure what else I can say about this book. I was very interested in the storyline and where that would lead. And the characters were great on their own but, in my opinion, lacked chemistry. I don't want to come off too negative because it it wasn't like it was terrible and I have no doubt that there are going to be plenty of people out there who will love it, unfortunately I'm just not one of them. I really wish I could have liked it more.