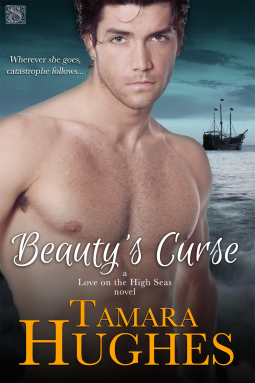 Amelia Archer will be the ruin of her family. Her extraordinary bad luck is burden enough, but her sweet, trusting nature often lands her in impossible scrapes. After the last straw, Amelia's harried father ships his unfortunate daughter off to the Colonies to live with her aunt. But wherever Amelia goes, bad luck is sure to follow...

Pirate David Lamont is taken with the lovely young Englishwoman the moment she's pulled aboard from her sinking vessel. But sailors are already a superstitious lot and Amelia is unwelcome. In a feat of chivalry, David defends and claims her for himself...

Now their fortunes—for good or ill—are invariably tied. But as much as she longs for him, Amelia cannot allow a romance. For a lady of misfortune can only bring ruin to those she loves…

Ever since I picked up my very first one a number of years back, I have had this deep, deep love of historical romances. There's just something so enchanting and fascinating about stepping into the past and the propriety of it all. And the swoons. Oh my gosh, the swoons. Though I had never read any HR with a pirate theme to it. Then last year I came across Tempting the Pirate by Tamara Hughes and had the urge to put in a request for it. Now, while it didn't wow me with that omg-that-was-totally-amazing type of love, I did fall into a deep like with it. Just lingering on the border of love. It was enough so that when I saw Beauty's Curse, regardless of getting approved from Entangled or not, this book was going to be mine.

The one question that has been bugging me since finishing the first book was what on earth happened to James Lamont's brother and was he ever going to be found. So I was doubly excited to realize that this book was his story and that I was finally going to get all of my questions answered.

Beauty's Curse was intense from start to finish. It starts out on a sinking ship and immediately had me on the edge of my seat and rarely let up on the intensity from there. There were times when the characters would be in the middle of a crap storm that wasn't quiet yet resolved only to have something else happen to make an already bad situation incredibly worse. It keeps you hanging on and I couldn't have put it down if I wanted to!

I loved these characters so much! It was instantaneous with both of them. There's Amelia who has been told basically her whole life that she's cursed and that bad things follow her and happen to those around her. She's desperate to get to America and make it on her own and keep the people she loves safe from her. But despite all of that she's still able to be this very sweet and trusting person. She finds the positive in everyone but herself. And then there's David who has been through some horrific things in the year it's been since he was kidnapped by pirates. He's become a very dark person by the time he meets Amelia. But she instantly stirs his protective side to life, he's drawn to her light.

The romance between Amelia and David is one of those slow burning ones. The kind where the sexual tension becomes so thick that even a lingering look is enough to make your pulse jump and desperately need something to happen with them. That's one of the things I love so much about HRs. They perfect that slow build up of intensity and emotions so that the end result isn't just a tiny spark it's a full on bonfire.

This book wasn't just heart pounding intensity and unbelievable swoons though. There was a bit of sadness and heartache to it as well. It deals briefly with slavery and the horrid treatment of slaves and the abuse of them. It was heartbreaking but I liked the fact that Tamara Hughes didn't shy away from tough subjects that were relevant to the time period this book is set in.

Overall I loved this book. It was so much better than the first one! It was exciting and gripping and full of swoontastic yumminess! I can't wait to see what Tamara Hughes has in store for this series next! From what it says in the author's note at the end, the final book in the trilogy is going to focus on a female pirate. How exciting! It can't get here fast enough in my opinion.