ARC REVIEW: Blame it on the Kiss (Kisses in the Sand #2) by Robin Bielman 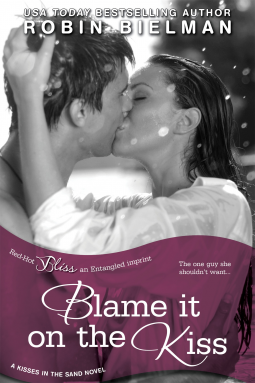 The one guy she shouldn't want...

Honor Mitchell has lived with guilt and regret for a long time, so when she promises to do the things on her dying best friend's wish list, she's determined to follow through and do something right for a change. But when she's thrown together for wedding duties with the one man who complicates her vow - just by looking at him - she has to put her faith in Bryce Bishop's pledge to help her, no strings attached.

Bryce's near one-night stand with his ex-girlfriend's best friend a few months ago might have been a mistake, but helping the beautiful, free-spirited Honor with her promise isn't. His trust in women is shot, but he can't help but play his best man card to his advantage and help Honor tick off the items on his ex's list, even if it puts him in a no-win situation. Because his assistance might get Honor what she wants, but suddenly being the do-good guy puts his plans - and heart - in serious jeopardy.

So, I have very mixed feelings after finishing Blame it on the Kiss. I was intrigued by the storyline with the possibilities of tension because we have a best friend/ex-girlfriend who has passed away and the guilt between these two people from her life for feeling an attraction towards one another. What can I say I enjoy messy situations in books. Unfortunately, some of it worked really well for me and some of it didn't. Don't get me wrong I did enjoy it quite a bit, I just wasn't in love with it.

While the core group of main characters I thought were great, I felt like there were just too many secondary characters who took up all of maybe 30 seconds of reading time. Names were constantly being thrown at me and then never really mentioned again and it was hard to keep people straight. Like when a guy named Drew was noticed hitting on Honor it was pointed out that Drew was Mark's friend/cousin/brother (something) but when that was pointed out my brain was only thinking, "wait, who is Mark?" There were some people whose purpose of having a name put to I just wasn't sure of. I'm not even sure if this makes sense outside of my mind haha.

Though at times I found her to be a bit on the dramatic side with her emotions, Honor was a lot of fun. I loved the close relationship she had with her brother and her relationship with him as well as the impact that her relationship with Payton still had on her, you could tell she has this huge heart and a strong sense of loyalty. She has this strong outward appearance but it only takes a second in her point of view to see just how insecure and full of self doubt she is. Then there's Bryce who is so incredibly sweet and sexy. He's that really good guy that you know has a naughty streak inside of him just waiting to pop out. He's the one thing that I really, really fell in love with in this book.

One thing this book was not lacking in the least was sparks or chemistry. The relationship between Honor and Bryce was the perfect mixture of sweetness and steamy. Plus you know how someone almost always makes a grand gesture in romance novels. The one big huge declaration to show their love and win back the person they love? Oh my gosh, Bryce's gesture at the end of this book alone is worth every minute you spend reading it. It's so simple and yet so freaking sweet and swoon worthy. Sigh. I want a Bryce of my own.

I believe the biggest problem I had with this book was that I really felt a detachment with the whole Honor-Payton-Bryce situation. (Payton being the ex-girlfriend/best friend who at the start of the book has been gone for like 6 months or so.) My brain understood the concept of their guilt or any other feelings they had towards Payton, but we don't get to know her ourselves except through stories from other characters so I couldn't stop feeling like 'she's gone get over it and kiss already' because I didn't feel any loyalty towards her myself. So it ended up making me feel frustrated from time to time because I wanted things to happen but guilt kept getting in the way.

For me personally, I feel like I probably would have benefited more from maybe an extra chapter squeezed into the beginning. Maybe getting to see Payton and Honor before she was gone first hand and feel a better attachment to their situation. Maybe even get that first almost encounter between Bryce and Honor, because as it was the opening of the book when the two of them are in a dark closet and verbally reliving the moment with "and you said", "then you said", "right and then you said" well it just didn't flow well or feel natural. To me.

Now I haven't read the first book in this series, Keeping Mr. Right Now, yet, but I have discovered that it's already been on my Kindle so I am looking forward to going back and reading Sophie and Zane's story. They seemed like a really fun couple and I want to see how they got to where they are in here. I did have fun reading Blame it on the Kiss. It was quick and sweet and I look forward to reading more of Robin Bielman's books in the future!

Thanks to Entangled Publishing for the opportunity to read and review this book.