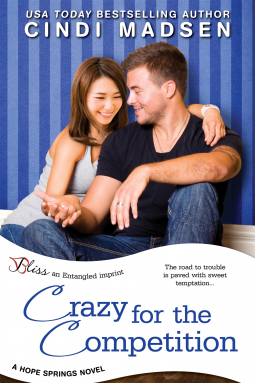 The road to trouble is paved with sweet temptation…

Always the rebel in her ultra-conservative family, Quinn Sakata dreams of quitting her dad's real-estate business and restoring the old Mountain Ridge Bed and Breakfast in her hometown of Hope Springs. Except that Quinn's not the only person bidding on it. Worse still, her competitor is her high school crush, Heath Brantley, who is all kinds of ripped, tattooed hotness...

So much for her "nice, conservative boys" rule.

Heath has his own reasons for bidding on Mountain Ridge, and he won't give in without a fight - even to the red-lipped hottie with a sailor's mouth. But when their rivalry shifts into an unexpected zing of chemistry, Heath realizes he's in deep trouble. Because it's inevitable that emotions will get involved, and he needs to keep his eyes on the prize before they both get hurt.

I read the first book in this series, Second Chance Ranch, last year and absolutely loved it. There were a few characters in it that I was really excited to get to know better. One of them being Quinn of course. Quinn's book ended up being way more than I hoped it would be.

Quinn is one of those really great characters who, from the outside and to others, seems like she's a swirl of contradictions but deep down she's actually pretty simple to figure out. What I loved best was the fact that her Japanese culture played a huge part in her character. From her relationship with her family to her morals. Quinn tries so hard to please everyone and keep everyone happy, even at the expense of her own happiness. She was fun and playful and a very passionate person. I mean, even I ended up with a bit of a girl crush on her!

Heath... Shitballs, as Quinn would say. Heath is like every single fantasy I could ever have rolled up into one delicious, panty dropping package. He's tattooed and pierced. He's a musician. He's a country boy. He's good with his hands, like mechanically and construction wise. There's not much that this guy can't do. I'm sure there were hearts in my eyes and a huge, ridiculous grin on my face every time he was on the pages.

I loved the rivalry between Quinn and Heath. It didn't get vicious and was even playful and flirtatious through a lot of the book. I mean, they had their moments where the negative tension was unavoidable, but they fought so hard to keep the competition for the property separate since the sparks between them were undeniable.

The romance was achingly sweet. I mean I was in full on swoon mode through the whole thing. These two, quite literally, come from two different worlds. Not just their cultures. Heath is like the-wrong-side-of-the-tracks kind of guy and Quinn comes from money. Even with all the differences between them, nobody could really understand each other and where they're coming from better than the other one. Heath wants away from his dad just as much as Quinn wants to separate herself from her dad. Granted it's for different reasons but they both get it. It makes you really want to root for them to make it through all the things that get in their way.

Even though, to me at least, the resolution of the property war is pretty predictable, I mean, it's exactly what I thought the moment I started reading. Regardless though, it didn't take anything away from my enjoyment. If anything it was more of a relief and just an it's-about-time type of a feeling. The romance is sweet, the characters are wonderful and complex and it is just a really fun read. Well as is everything I've ever read by Cindi Madsen. Every time I pick up one of her books I expect laughter and unbelievable swoons. And every single time she delivers.