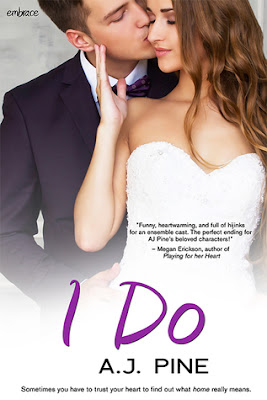 Sometimes you have to trust your heart to find out what home really means.

Duncan McAllister is marrying Elaina Tripoli tomorrow. Except--he's missing. Jordan, Noah, Griffin, Maggie, and Miles arrive in Greece for the festivities to find frantic messages from both the bride and groom. Noah and Griffin set off to find Duncan while Jordan, Maggie, and Miles try to salvage what should be a day of celebration before the wedding.

But the Americans have their own baggage. Noah's got a surprise planned for Jordan that has to go perfectly. Griffin's keeping life-changing news from Maggie. And Miles--well, he wasn't looking for love on this trip until a Greek sous chef named Alex rocks his world.

The race is on for Duncan to make it back to Elaina before she decides not to take him back at all. For Noah to make sure his monumental plan goes off without a hitch. For Griffin to tell Maggie the truth without losing her. For Miles to admit that letting himself fall in love is worth the risk.

Happily Ever After waits at the finish line…if the four couples can make it on time.

I Do ended up being a very pleasant surprise. I got pretty intimidated when I first started and discovered it had seven points of view. Seven. The most I've ever dealt with has been three, so I was worried that it was going to end up being too much or jumbled or confusing or any number of risky things hopping around between so many heads. Honestly though, for this book, it really, really worked.  Even starting this series on book three didn't throw things out of whack either because I never felt lost with any of the characters or their history. Basically I had tons of fun reading this book!

I liked each one of the eight characters that this book shuffles through in varying degrees. A couple were just okay, a few were great and two of them completely stole my heart. But there really wasn't anybody I did not like at all. Alex and Miles were totally my guys. Part of me feels like, since they were the only new couple to this series, meeting and getting together in this book, that maybe it was the newness of them. Seeing the sparks of that first attraction and watching them fall for each other that did it for me. That and they were just so sweet and incredibly sexy! Even though I was intimidated with seven points of view at first, I felt it was such a shame to miss out on Alex's and seeing what exactly was going on in his head as Miles fought his feelings.

I really only take issue on one thing when it comes to this book. Each one of the couples always seemed on the brink of ripping of their clothes and jumping into bed at the end of each of their points of view. Now, it wasn't graphic sex each and every time though, sometimes a point of view would end with a bit, or a lot, of foreplay and then end leaving no doubt what happened after the switch. They're all young and in love, I get it. It's just that the first 10 percent alone was filled with heavy make out sessions and a whole lot of feeling each other up. And lots of leading up to sexual encounters and then switching views. It wasn't terrible, I guess I just wanted more story and conversations and showing me that it wasn't just each other's bodies that had all these people into each other.

One thing this book did a bang up job on was throwing wrenches into everyone's plans. Just when you'd think that things were going to smooth out something would jump out and threaten to rip the couples apart and then it would turn into a domino effect. There were times when I wondered if everyone who came to Greece would end up leaving there happily ever after you know? It was a bumpy but extremely fun ride that's for sure!

Seeing as how I did start this series in an odd place I would love to go back and read the first two books and actually see some of these people get together instead of just hearing about it in the past tense. Something I'll definitely have to do one of these days!

As I said in the beginning, this book truly was a pleasant surprise with 8 solid characters that would easily leave you laughing, swooning or completely frustrated. You could easily read this book on it's own if you haven't read the first two books, although it did leave me wanting to know more details.