REVIEW: Sleeping with the Boss (Anderson Brothers #1) by Marissa Clarke 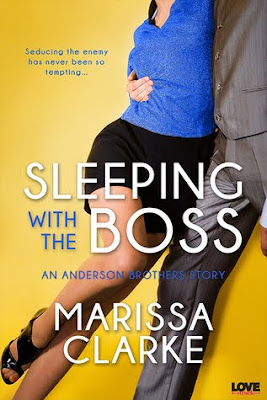 Seducing the enemy has never been so tempting…

For the last five years, bookish Claire Williams has been living for the dying. Now that her stint as caretaker is over, she’s off to see the world. She needs quick cash first, so a temp job at Anderson Auctions seems perfect, especially with the unexpected benefits, including the hottest man she’s ever laid eyes—or hands—on.

Former Marine William Anderson has been burned one time too many. His military training makes him the perfect man to flush out the spy undercutting his family business, but no amount of training can prepare him for the kind of undercover work he’ll have to do when the sexy new temp is implicated. Desire lands them in bed…but duty may cost him his heart.

So I'd been sitting here in a bit of a Anderson Brother's withdrawal of sorts after finishing the final book in the series, Chance of a Lifetime, the other week. I was both bummed because it was over and also beyond delighted that Marissa Clarke ended the series with such a bang. Yet I still wanted more. So as I was, quite literally, swiping through the titles on my Kindle rather quickly and with a rather ho-hum state of mind, all of a sudden Sleeping with the Boss jumped out at me! It was quite a forehead smacking moment because all I could think was "you complete dolt, you bought that months ago and never read it!" Of course then I had a moment where I did a little jig in my chair because...I HAD ONE MORE MOMENT WITH THE ANDERSON BOYS!

I always seem to fall hardest for books or series where you have a family or a group of friends that have really fun dynamics, and this series definitely falls into that category. I feel like not every author can quite do a good enough job separating the personalities in their characters and making them unique from each other. One of the things that makes these Anderson boys so lovable is how different they are from one another. Michael, book two, is the oldest. He's all business, suit and tie, very rigid, schedule everything and everything is precisely in it's place and neat and orderly. Then you have William, this book, in the middle. Will is more of the laid back type. He is serious and analytical in a sense, but also very playful and charming. He's really good with people and knows how to read them. He's a good problem solver which makes him perfect for his security gig. Then there's Chance, book three, the baby. He's definitely the wild one out of the bunch. He's the thrill seeker type, real adrenaline junkie, but he's also incredibly sweet and kind of perfect.

And the women they all lose their hearts too are just as great as the guys are! I freaking adored Claire to pieces! She's one of those characters where, if there's the slightest possibility that something could go wrong, when Claire is involved it most definitely will go wrong! That girl had me cracking up so much with all the bumbles and moments that probably would've had me horrified and locking myself in my room for the rest of my life with embarrassment if they were to happen to me. But Claire is just kinda shrugs it off and rolls with the punches. She was such an interesting and extremely fun character.

I will say that even though I did have the whole company spy thing figured out instantly, it didn't take away a single bit of enjoyment in the slightest. I still really enjoyed the storyline.

Oh swooniest of swoons, the romance! Will and Claire have this instant heat that was just so delicious. They easily fall into adorable bouts of banter that would leave me grinning ear to ear...and also in desperate need of some cooling off! They were the perfect blend of steamy and sweet.

The bottom line is, if you love funny, witty and sweet contemporary romances filled with the types off characters you wish you could pull out of the book and hang out with in real life, you absolutely need to give this series a try. Each one you read ends up being better than the last. They're quick and easy reads that were impossible for me to put down! I'm looking forward to see what Marissa Clarke has coming in the future because this series has added her to my list of authors I will buy and read anything from!