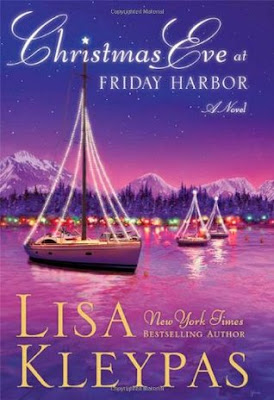 Now a Hallmark Hall of Fame television movie (December 2012), CHRISTMAS WITH HOLLY (previously published as CHRISTMAS EVE AT FRIDAY HARBOR) is the first book in New York Times bestselling author Lisa Kleypas’s new series, which begins during the most magical time of year...

ONE LITTLE GIRL NEEDS A FAMILY
One rain-slicked night, six-year-old Holly lost the only parent she knew, her beloved mother Victoria. And since that night, she has never again spoken a word.

ONE SINGLE MAN NEEDS A WIFE
The last thing Mark Nolan needs is a six-year-old girl in his life. But he soon realizes that he will do everything he can to make her life whole again. His sister’s will gives him the instructions: There’s no other choice but you. Just start by loving her. The rest will follow.

SOMETIMES, IT TAKES A LITTLE MAGIC…
Maggie Collins doesn’t dare believe in love again, after losing her husband of one year. But she does believe in the magic of imagination. As the owner of a toy shop, she lives what she loves. And when she meets Holly Nolan, she sees a little girl in desperate need of a little magic.

…TO MAKE DREAMS COME TRUE
Three lonely people. Three lives at the crossroads. Three people who are about to discover that Christmas is the time of year when anything is possible, and when wishes have a way of finding the path home…

For the last few years there's been a movie that I have to watch, usually more than once, once the Christmas movies start hitting the television. It's this adorable movie called Christmas with Holly, on the Hallmark Channel. Part of the appeal for me is the fact that it's set on one of the islands just a ferry ride off from the town I live in, but mostly because it's a cute, sweet and heartwarming story. My powers of observation failed me for the last few years because it wasn't until quite a few months ago, when browsing through BookOutlet and saw the title Christmas with Holly that I realized it was based off of a book by Lisa Kleypas. Of course I couldn't resist getting my hands on it and with it being the Christmas season I finally allowed myself to dive in!

While the basic storyline is pretty much the same as it is in the movie, there's also a lot...a lot that is different. Normally I'm a read the book before I see the movie type of person but since I was oblivious of the book up to this point I've come to the realization that I seem to be loyal to whichever I get to first. In this case that would be the movie. I mean, don't get me wrong this book was fine. But that's just it. It was just "fine" for me. I feel like had I read the book first I would've ended up skipping the movie all together simply because it was based off of this book. Thank goodness that didn't happen!

The thing that rubbed me the wrong way the most was Nolan brothers and just how vastly different they are between the two formats. In the movies Mark, who this first book centers around, is kind of boyishly handsome and he's sweet, like so, so sweet. I absolutely adored him. Then I read the book and he's just so cold and stern almost, very untrusting and way too buttoned up and serious. And the vibe I get from Maggie is that she views him as intimidating. For me, he was extremely unlikable. Well at least before Maggie starts rubbing off on him and he eventually lightens up again and I saw minuscule glimpses of the guy I loved from the movie.

Plus one of the things that had me really excited to read the book version was I liked the dynamic you had with the three brothers. They weren't exactly close and thick as thieves but you could see the way they looked out for one another and there was an easy banter between them. In the book they're almost all indifferent towards one another throughout most of the book. It was a pretty sad discovery.

Both Maggie and Holly were the bright spots of this reading experience. They were exactly as I was expecting them to be, so that was a plus. Maggie is the type of character you'd want to surround yourself with. She's like positivity, optimism and happiness personified. She's been through a lot and even though she has this sad side and has given up on one part of her life you still can't help but feel happy when she's on the pages and spreading hope and, well, the magic that is her. And Holly, well you can't help but fall in love with this adorable little girl who's lost so much at such a young age. I want to pull her out of the book/movie, either one, and protect her and care for her.

Though once again, the timeline in which certain aspects of the story play out were very jumbled and different. The one thing piece of the storyline that captures my heart the most, the reason I watch this movie year after year and get all emotional about is like wham, bam and done in just a couple chapters. I feel like that piled on top of just how different and unlikable Mark was left me feeling quite a bit indifferent to this book.

I mean, I feel horrible, terrible saying this but...find the movie and watch it. I kind of wish I'd skipped read this one by myself.

A part of me kind of wants to check out other books in this story and see what happens with Sam and Alex, the two brothers, now that I know there's a whole series. I am really, really curious. But a bigger part of me is telling me that I should just stick with her historical romances which I absolutely love!

It really makes me sad that I didn't love this one as much as I wanted to!