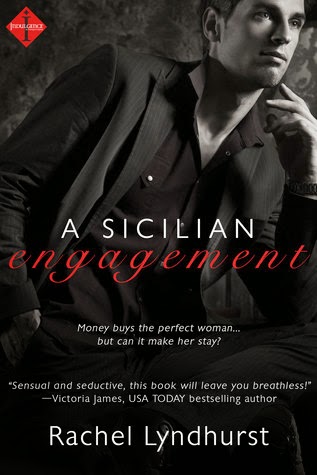 Billionaire Sicilian, Lorenzo Ferrante, needs a fake fiancée, and fast, in order to close a deal that will set him free from ties to a sordid past he never wanted any part of. Starting fresh somewhere else is all he wants for himself and his little girls...

Lora Pryce-Howard has been conned into playing Ferrante's fiancée thanks to her low life brother. And if she wants to keep her business, a roof over her ailing mother's head, and her brother alive she'll play along. She refuses to be seduced by a luxurious Mediterranean lifestyle, but Ferrante's soft words and burning kisses make leaving all the more difficult...

I received a copy of this book from the publisher in exchange for an honest review. In no way did this sway my review or my rating!

I requested quite a few ARCs from Entangled this month. Normally when I get the emails of available review copies I find three or four that pique my interest and even then I only receive one, maybe two of those if I'm lucky. This month I ended up with around ten I think. I've loved some, a few of them I wasn't feeling at all, but there were also a couple that, like the porridge that Goldilocks ate, were just right. Somewhere in the middle. This book was one of those that was in the middle. Which isn't exactly a bad thing! I mean while no, I wasn't doing cartwheels, it still pulled me in right away and kept me entertained 'til the end.

I normally tend to avoid the Indulgence line, which is weird coming from me I know. I mean alpha males are like...chocolate cake. I know it's bad for me but I crave it...err them. And that's what they're all about. Powerful men. Alphas. But the thing is most of the ones I've run across are about rich tycoons, billionaire playboys, hard businessmen. Which isn't bad but...they all tend to be cold and like I said hard. It's all about making money and getting all the power. I have a hard time swooning over these guys. But there was something about this one that made me want to risk it. While Lorenzo was a lot of those things, he was a hard, powerful and a bit of a control freak, he was also very likable. I was pleasantly surprised. I expected the worst and I was proven wrong.

There were some things that bugged me though characters weren't part of that, well except for one really. Lora's brother was just...odd and a horrible, horrible person. I found it sort of uncomfortable that he called his own sister; sweetie pie, petal, sugarplum and honeybee. Is this like a UK thing? Because if my brother ever called me anything like that except sarcastically to push my buttons I'd probably punch him and tell him to quit being so creeptastic. Thankfully he was only in the beginning so I didn't have to put up with him for long. But that wasn't really a thing for me because he was such only physically around for about 40 pages or so after that he was only mentioned in conversations or in thoughts.

What did get to me was sometimes I felt like the book was trying to hard. Words or phrases were in it that disrupted the flow for me. Two I actually had to look up and it's not exactly like I'm stupid or anything. Honestly detritus? In the situation in pertained to in the book I feel like most people would have just said volcanic debris or something along those lines. And oligarch? It was just a bit much for me. I don't want to read a book to be impressed with someone's vocabulary, I want to get lost in it. Which becomes more difficult when I have to stop and look something up. Keep it simple, it can still be beautiful without all the flowery words. Maybe it's just me and I'll be alone but there it is.

I mean there were other little things as well, but at the end of the day the storyline was great, though there was a missed opportunity to add a bit more danger to it but that's not a complaint, just an observation. The characters were fun and surprising. I took a risk and I'm good with saying I feel like it paid off. It's definitely changed my attitude about avoiding the books about these types of alpha males because Lorenzo was definitely worth a swoon or two.

Thanks Entangled for the opportunity to review this book!