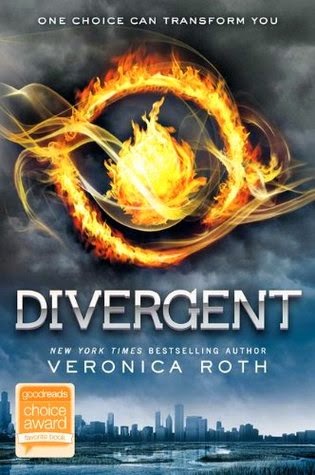 In Beatrice Prior's dystopian Chicago world, society is divided into five factions, each dedicated to the cultivation of a particular virtue--Candor (the honest), Abnegation (the selfless), Dauntless (the brave), Amity (the peaceful), and Erudite (the intelligent). On an appointed day of every year, all sixteen-year-olds must select the faction to which they will devote the rest of their lives. For Beatrice, the decision is between staying with her family and being who she really is--she can't have both. So she makes a choice that surprises everyone, including herself.

During the highly competitive initiation that follows, Beatrice renames herself Tris and struggles alongside her fellow initiates to live out the choice they have made. Together they must undergo extreme physical tests of endurance and intense psychological simulations, some with devastating consequences. As initiation transforms them all, Tris must determine who her friends really are--and where, exactly, a romance with a sometimes fascinating, sometimes exasperating boy fits into the life she's chosen. But Tris also has a secret, one she's kept hidden from everyone because she's been warned it can mean death. And as she discovers unrest and growing conflict that threaten to unravel her seemingly perfect society, Tris also learns that her secret might help her save the ones she loves . . . or it might destroy her.

When dystopia is done right there is nothing like it in the world. All of the contemporary, paranormal, historical, even epic fantasies will never measure up to how I feel when I get lost in these worlds. It is my all time favorite genre. So why has it taken me so long to finally read Divergent? I'm always afraid, almost doubly so when it comes to books that are surrounded by a lot of hype, what if this is one that disappoints me? Is it just going to be like all the rest?

The other factions celebrate birthdays, but we don't. It would be self-indulgent.


The dystopian Chicago world that Veronica Roth has created is definitely unique, unlike any others I've read so far. It was interesting to learn a bit about the 5 different factions, a few more so than the others at this point, and also see how they interacted in a mixed setting like the high school in the beginning of the book. The way they all carry themselves and behave are so vastly different. I was fascinated by it all and it had me thinking, in the beginning, when I just had those brief first impressions, what faction would I choose? It felt like there was a bit of a benefit with each one, though I'm not sure I'd have survived Candor. 100% honesty at all times? I'm not one for lying and dishonesty but sometimes letting someone off easy instead of brutal honesty just feels better. Yeah I would not survive Candor. But the rest initially seemed to be groups I'd enjoy being around. That idea didn't stick around for long.

"Just because we're in the same faction doesn't mean we get along."


As with books of this nature there are going to be characters you love and characters you all out despise. This book has both types in spades. And then there were those that flipped a switch on me before I finished, both in good ways and bad ones. It wound up making me cautious and start to doubt who I trust and who I don't. I adore Tris, she kicks some major ass. She's definitely one of my favorite female heroines. So strong and so smart. In a lot of ways this girl comes off as being full of confidence but underneath that there's a bit of fear and vulnerability even a bit of doubt within herself that helps her feel more real and more likable. And Four had me intrigued before I even opened the book. I mean if you've heard about this series then you've heard the girls are crazy about Four. I can see why. It's a very slow process learning about this guy and what's underneath the tough guy that everyone sees him as. He's definitely a mystery. Still don't know everything about him but he's already been placed up there with all my other book boyfriends. I can't wait to dive into Insurgent and find out what's next for these two.

"A kiss is not something you do in public."


I am a romantic at heart and I love a good love story like the next person.  But what I love about Divergent, so far at least, is that any sort of romance is really just sort of a side story and it's not the main focus of the book. All the kissing of the boys and the swoons and the fluttering of the heart are all awesome, but when I read dystopia I want creative worlds and conflicts and action and uprisings, rebellions. I want everything to fall apart and I want to be stressing out wondering how in the hell these people are going to come back from everything that's happened. I want all the things! And this book is full of all that, or at least beginnings of them in some cases. Jumping off moving trains and rooftops. Wars between factions. Shootings. Death. Friendships. Betrayals. It has it all and it was amazing. I am irrevocably in love with this series so far and you can bet once I type the last word in this review I'm picking up Insurgent, which is sitting right next to me, and you better not even think about disturbing me!