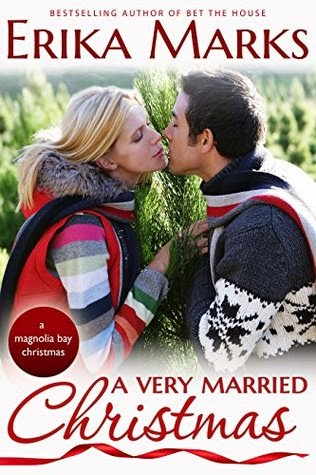 Cookbook author Marley Chambers can’t think of a more festive way to spend Christmas than at a friend’s holiday wedding in her hometown of Magnolia Bay. If only her soon-to-be ex-husband, all-star pitcher, Beckett “Beck” Chambers wasn’t bringing his new girlfriend—and if only he wasn’t still the sexiest man to ever walk out onto the mound…

Beck never wanted the chaotic life of a sport star—especially not at the cost of his marriage to the only woman he’s ever truly loved. But his career is a runaway train—and he’s afraid it’s too late to hit the brakes.

But when a mix-up leaves Beck and Marley stranded together for Christmas Eve on the barrier island where Beck proposed years before, old memories burn bright—and sparks fly hotter than a bonfire on the beach.

Could the magic of the season bring the gift of a second chance, just in time for Christmas?

I was extremely excited for this one. Who doesn't enjoy a second chance at love? Overall I enjoyed this book, though there were parts that I struggled with greatly. I feel like this one would have gone over better with me had it strictly been in Marley's point of view. I was highly sympathetic towards her and found her extremely likable. When it switched out of her point of view however, for a good portion of the book, that's when things went downhill and fast.

I found it difficult in the beginning whenever it would switch to Beck's point of view because we get to know Marley at first and like her and feel for her and then to have his new relationship in our faces with the younger, skinnier and flashier new girlfriend had me feeling less understanding and more dislike than anything else. To see him all over her even in the privacy of their own room left a really bad taste in my mouth. It paints him in more of the bad guy roll. He's not even divorced and him bringing his new girlfriend to a holiday wedding knowing his not quite ex-wife was going to be there was really distasteful in my opinion. It is grudgingly, and very much so at that, that I will now confess that by the end of the book I actually found the guy to be kind of decent.

Everything seemed so black and white in this book at first. I had my mind made up early on but the less I had to deal with hearing about the plastic bimbo the easier it was to accept that thing that people always say to be accurate. There's 3 sides to every story. Yours. Mine. And the truth. Beck wasn't the bad guy I was judging him to be. They both made mistakes at the end of their marriage. Something that was very hard to see, at least for me, when dealing with some of those early scenes I was talking about.

I know all of this probably sounds extremely negative and maybe even like I hated this book. I honestly didn't. There were obstacles and hurdles to jump, but once I did I may have even swooned a little bit. Okay, maybe a lot. There was a sweetness and romantic quality to how their story comes to an end. I really enjoyed it, but I would have enjoyed it just a little bit more had it stuck to the one point of view and Beck hadn't looked like such a monster.

Erika Marks is a women's fiction writer and the author of LITTLE GALE GUMBO, THE MERMAID COLLECTOR, THE GUEST HOUSE and IT COMES IN WAVES (July, 2014). On the long and winding road to becoming published, she worked many different jobs, including carpenter, cake decorator, art director, and illustrator. But if pressed, she might say it was her brief tenure with a match-making service in Los Angeles after college that set her on the path to writing love stories (not that there isn't romance in frosting or power tools!) A native New Englander, she now makes her home in Charlotte, NC, with her husband, a native New Orleanian who has taught her to make a wicked gumbo, and their two little mermaids. For more on Erika’s books, visit her website at http://www.erikamarksauthor.com

My reviews for the other books in this series here:

The Trouble with Christmas (Southern Born Christmas #4)
by Kaira Rouda