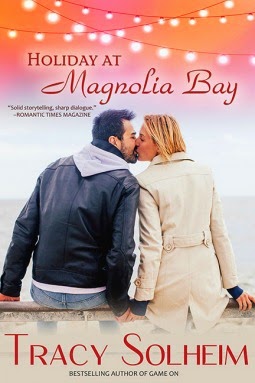 After a mission goes terribly wrong, ending in the death of a teammate, Navy Seal, Drew Lanham, is forced to take a leave from active-duty. Retreating to his godmother’s beach house in coastal Magnolia Bay, Drew plans to spend the three weeks R&R licking his wounds and catching some rays while the nightmares from his failed op fade. The last thing he wants to do is mingle with the locals. What he doesn’t count on is an early morning encounter with a goddess rising from the sea. His interest is piqued and his body put on alert when he finds out that same woman may or may not be after his godmother’s money.

Marine biologist, Jenna Huntley, has been searching her whole life for a place to call home and Magnolia Bay is that place. Unfortunately, she’s underutilizing her education giving tours at the town’s turtle rescue center. With the help of an octogenarian patroness, she maps out a proposal to develop a turtle hatchery on-site. Everything is going as planned until the older woman’s godson arrives. Suddenly, nothing is as it seems and Jenna’s future is hanging in the balance, with a sexy warrior pulling all the strings. Her natural tendency is to help the damaged hero, but she’s sworn off letting military men in her life ever again.

Will Drew and Jenna be able to put their pasts behind them and learn to trust their hearts long enough to enjoy their Holiday at Magnolia Bay?

For such a short book Holiday at Magnolia Bay sure was an emotional one! I was really looking forward to this one and it didn't let me down. Okay, well maybe just the fact that it was over too quick! It was a great mix of both the serious and the heartfelt with the sweet and the funny that left me either laughing, swooning or tearing up.

I didn't think I was going to like Jenna at first because she seemed very bitter and cold but as the story progressed and I got to know her better I had to wonder if I wouldn't come off that way myself. I actually got to like her quite a bit. She's very passionate about her project and it was easy to toss out first assumptions when you see her light up about her sea turtles and marine biology. And Drew, oh man. How can you not fall for a Navy Seal struggling with a bad case of PTSD? Some things are just inevitable!

As quick of a read as this was there sure were quite a few memorable characters involved. Not just Jenna and Drew but there was a sweet older matchmaking godmother up to lots of shenanigans with these two. Evie actually became one of my favorite parts of this book. Along with Jenna's roommate Macy there was plenty of humor woven into this story.

As I stated earlier Drew does suffer from PTSD and I felt like the way it was touched on here and there were done tastefully. It really pulled my heart into this book and had me reaching for the tissues on a couple of occasions.

I really enjoyed this book and it was left with the perfect opening for the possibility of a book for Drew's older brother Jack. Who is just as charming as his brother from his brief appearance towards the end. My fingers are crossed for this to happen because I would love to get to know Jack better. And see more meddling Evie while I'm thinking about it!

Tracy Solheim is the international bestselling author of the Out of Bound Series for Penguin.  Her books feature members of the fictitious Baltimore Blaze football team and the women who love them.  In a previous life, Tracy wrote best sellers for Congress and was a freelance journalist for regional and national magazines.  She’s a military brat who now makes her home in Johns Creek, Georgia, with her husband, their two children, a pesky Labrador retriever puppy and a horse named after her first novel. Her fifth book for Berkley, Back To Before, will be released in January.  She also has a digital holiday novella for Tule Publishing's Southern Born Books coming October 20. See what she’s up to at www.tracysolheim.com. Or on facebook at Tracy Solheim Books and Twitter at TracyKSolheim.

My reviews of the other books in the series here:

The Trouble With Christmas (Southern Born Christmas #4)
by Kaira Rouda