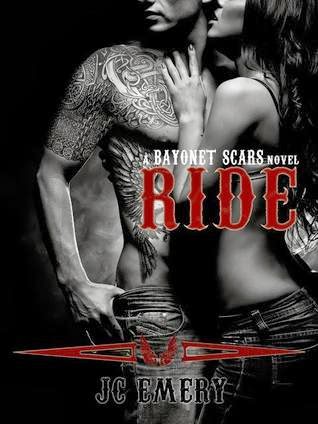 Principessa to the Mancuso crime family, Alexandra knows a thing or two about living outside the bounds of the law. Suffocated by the future her father has laid out for her, she makes a choice she can't take back, changing the entire trajectory of her life.

Thrust into the dark and dangerous world of the Forsaken Motorcycle Club for her own protection, Alex finds herself faced with the last thing she needs right now: the man of her dreams. He’s sex in leather, the devil incarnate, and one hell of a kisser. But he’s also off-limits. Ryan Stone can be her friend, but he’s forbidden to be her lover.

Third-generation Forsaken, Ryan knows nothing other than life on two wheels, and he wouldn’t have it any other way. He enjoys the many privileges that come with the patch, and the only laws he recognizes are the ones set-forth by his club. That is, until who he wants more than anything isn’t allowed on the back of his bike —or in his bed. Balancing his desire for her body, and need to keep her safe, Ryan tries to keep Alex at a distance. Finally having made a choice for herself, she’s done hearing the word “no” and will push boundaries even Ryan himself doesn’t dare cross.

Love is never more tempting than when it’s forbidden.

This book isn't for the faint of heart. If you're looking for a sweet, romanticized version of a motorcycle club romance where the brooding, bad boy biker falls for the sheltered, beautiful, mafia princess and he whispers words of love and devotion to her as they ride off into the sunset on his Harley...this isn't the book for you. It's dark and gritty. It's rough and dangerous. It pushes boundaries. Ryan isn't the knight in shining armor riding up on his white steed and sweeping you off your feet. Ryan is an asshole in leather on the back of a Harley. It's not whispered words like "I need you" that come from Ryan's lips. Instead he whispers words like "I'm going to fuck you out of my system". That's the kind of book you can expect to crack open...and it's my new addiction.

It's as real as anything fucking gets. That kind of shit makes a man almost believe it can be replicated.

I've never read an MC romance before. It's not that I haven't wanted to, it was just a matter of where on earth do you start? I knew it had to be good because, let's face it, it's kind of a turn off when you're trying something new and it doesn't capture your attention. It makes it harder to pick up something from that category again. When the opportunity presented itself to review the first three books in this series I was a bit iffy. I looked this one up and read the blurb and while it had me curious I was still on the fence. Until I scrolled down and saw that one of my favorite authors had given it 5 stars. I mean she's one of my biggest go-to gals when I want to read something sweet and swoony. Heavy on the sweet! So to see her give it such high marks there was no question I was sold. And if this book is any indication of the quality of MC romance books out there, then I have a new obsessive fascination to soak up my time. Or a new author at the very least.

It's unfortunate how little physical contact I've had with others that even the smallest touch matters to me.

The characters are brilliant and so freaking real. Alex is like a swirl of contradictions all rolled up together. She's sheltered and a bit naive, yet strong and bold. She has moments of tremendous confidence and others where she's unsure and afraid. She craves freedom and when it's offered she wants structure and instructions. For the lifestyle that she grew up in she has one of the biggest hearts I've seen along with determination and a fire that all come together to make up one of my favorite main characters I've read.

Ryan is like a game of Russian roulette. It doesn't matter how it ends, it's not going to end well.

As I said in the beginning Ryan is an asshole. He's intense and at times heartless. He's cocky and gruff. He thinks things like I hate it when bitches are sad. They end up crying and shit.There are so many negative qualities I could sit here and point out for you about Ryan but one of the worst ones is how dangerous he is...especially to your heart. It didn't matter how awful he could be at times, and trust me it was pretty fucking bad, there's just something about him that draws you in and has you losing your senses and better judgement. Alex sees him though and through her and her belief in him and determination and trust you can't help but feel it too. I quite easily lost my heart to him and want nothing more than for him to look me in the eyes and grunt "Again." If you've read this you understand. *Fans self*

The truth is, everyone is going to hurt you. You just got to find the ones worth suffering for. - Bob Marley

I'm enjoying diving into the darker worlds of romance. Sometimes I don't always want sweet and sappy. I love those kinds of books truly, but there are times I love the emotional toll a book like this can take on you, having my heart put through the wringer. Don't get me wrong though this wasn't beginning to end dark and rough. It was also funny and a bit sad at times and even a few moments of heart pounding sweetness. I'm so sad to say goodbye to this one but I can't wait to start Thrash after I'm done here and dive into Duke's story. Sure he's another asshole but I can't wait for him to start pissing me off...and making me fall for him. J.C. Emery...you have a new fangirl in the making!