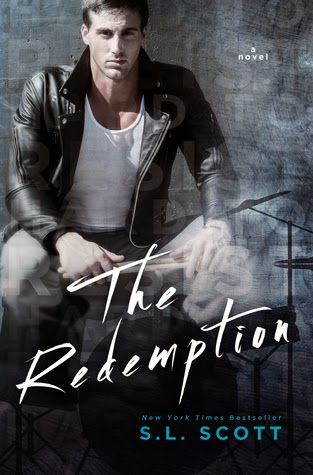 He was everything she never wanted. Yet, she couldn’t stop thinking about him.

A body that beckoned for sin

Three years ago Rochelle Floros was living her dream come true… then lost it all. On the worst day of her life, the last person she expected to be there for her was a rock star and tabloid favorite. Now, she’s trying to rebuild her life after the tragedy that destroyed her fairytale. Slowly, she found herself captivated by a sexy, bad boy drummer she had known for years.

Rochelle was caught between the grief that shrouded her heart and the charismatic man that made it race. What she didn’t know is if he was being sincere or toying with her heart. The Redemption is about finding the pulse of your soul in the most unlikely places and giving love a chance to grow.

Can what she wants really be what she needs? With his rhythm and her passion, can they make music together? Or will their harmony be lost forever?

This was my first book read by S.L. Scott though I do have another of her books on my Kindle that I haven't gotten to yet. The storyline for this one intrigued me. The Redemption was quite a roller coaster. While I enjoyed it quite a bit by the end, there was a bit of frustration with it, some of it good and some of it maddening. Even with that bit of frustration though I was pulled in enough that I didn't ever feel like I wanted to give up on the book. Quite the opposite, I just had to know what was gonna happen with these two. There were moments I rooted for them and others I thought they were a disaster waiting to happen. It was all very up and down from one moment to the next.

Sadness surrounds me and I feel bad for not feeling worse.


From the opening line I knew this was going to be more on the sad side and that Dex was going to be one of those highly broken guys that I love to read about. He definitely has the tortured artist/musician thing down to a tee. Booze, drugs, women, cocky attitude, everything you'd expect from a bad boy rocker. But underneath all of that he has moments of sensitivity and warmth, the moments when he's just so very good and sweet that let you know there's something in there worth fighting for. He does have these times though where I just wanted to throw my hands in the air and walk away because he would slip into moments of douche baggery. Dex is not easy to love by any means. He's a definite fixer upper.

Rochelle was extra tough for me. I really truly felt sorry for her. I mean to call what she's gone through a tragedy is almost an understatement. And I'm not dismissing that fact or that she went through it, but I felt like she was stuck, for a good chunk of the book, forever in that moment. Forever stuck in a tragic event and not even trying to move past it. Just about everything she does hangs on to that grief and doesn't let it go. She may seem all smiles and normal, well as much as anybody is normal, but she was very frustratingly not. I was continually thinking for crying out loud move on after three years you deserve to be freaking happy!

It's not a question as to whether or not these two have chemistry. They have it in spades and it's that intense kind that leaves you breathless. The problem with Dex and Rochelle is her guilt and inability to let go and Dex's absolute obsession and addiction to her. Most of the time, when he wasn't being a butt, I felt so freaking bad for him because of it.

With a break and maybe a few less angsty books in between, I really want to give The Resistance a go. These are standalone books but The Resistance is about the front man in the band. He makes some appearances in this book and at one point even provided me with some much needed laughter to lighten things up. I can't wait to get to know him better as well.

This isn't an easy book to read, it's messy and it's complicated. It's not boy meets girl and they fall in love and there's rainbows and kittens. You've got two screwed up people who struggle to come together. Fighting tragedy, judgement, lies, insecurities, self destruction, vices, and other outside forces. So many things get in that way. Just when you think things may clear up another bomb goes off. But I still really liked it. Sometimes I like messy. Sure there are times when I felt like it was too much but something would always come around that would make up for it. Life is rough and messy though so it had a very real feel to it in that sense. In the end it made me feel and even made me cry. And in this case, those are very good things.

“Here’s the truth of the matter. If we do this... again, there’s no going back to square one tomorrow. Not for me. I won’t be able to act like I don’t care about you, like I haven’t thought about you every day since we were together last. So it’s easier to stop now than later.”

With a discouraged sigh, I say, “You’re stronger than me, Dex.”

“No, I just know my greatest weakness is the woman beneath me right now.” He rolls over sighing in a way that shows frustration has set in. Turning his head to me, he says, “I want to fuck you so bad, but I also want to do all that making love stuff too. And if we do that, I can’t pretend it didn’t happen.” He sits up and walks to the other side of the room, leaning his back against the wall.

I prop myself up on my elbows, caught by the heaviness of the emotions I’m suddenly feeling for him.

“Go to sleep tonight. Fly home tomorrow.” He walks into the shadow of the entryway. “I’ll see you in a few weeks.”

I hear the door open as I fall back on the bed, my own sexual frustration setting in. But just when I hear the door close, the weight of his body lands on top of me and he kisses me hard. Surprised, my eyes fly open, but then I go for it just like him and kiss him back with just as much passion. He pushes off of me again and stands between my legs. “I make very few promises in life, but this one I can make to you. Rochelle Floros, I’m coming for you. It’s our time, so get ready for me.” He turns abruptly and leaves me sitting there stunned... and tingly.

S.L. Scott is a former high-tech account manager with a journalism degree pursuing her passion for telling stories. She spends her days escaping into her characters and letting them lead her on their adventures. Live music shows, harvesting jalapenos and eating homemade guacamole are her obsessions she calls hobbies. Scott lives in the beautiful Texas hill country of Austin with her husband, two young sons, two Papillons and a bowl full of Sea Monkeys. Her novels include Naturally, Charlie, Good Vibrations, and A Prior Engagement.