I have become so obsessed with this series that it's kinda scary. I have no freaking clue when these books come out the only thing it says is 2014. J.C. Emery's Twitter profile says Fall 2014 and I need them like yesterday. I skimmed the blurbs just enough to catch names to see who they're going to be about and I'm excited for both. But I didn't look long enough to find out the girl for the last book so I can be surprised for Ian. I NEED THEM NOW! Ahhh! Sigh. *Shakes in the corner from withdrawals* 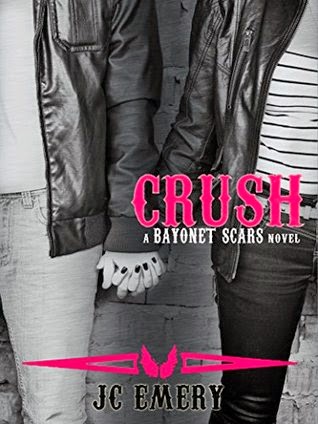 Young love is always perfect. Until it's not.

Cheyenne Grady is a total daddy's girl to her bad-ass father, the Sergeant-at-Arms of the Forsaken Motorcycle Club. She's funny, and kind, and she just wants that deep, earth-shattering love like her dad has with her school secretary, Holly. But Cheyenne's been looking in the wrong direction, because the only good that can come from the way she looks at Jeremy Whelan is a lesson in heartbreak.

Jeremy always wanted to prospect for the Forsaken Motorcycle Club and wear the same patch as his father. When a life-long dream becomes reality, Jeremy realizes that the outlaw lifestyle is not for the faint of heart. Nor is it easy on relationships. He wants to be a good man, but temptation is everywhere.

Cheyenne is beautiful, and strong, and exactly what Jeremy could have forever. As long as he doesn't screw it up.

Love is never more powerful than the first time.

The blood of enemies coats the leather of their vests and a trail of bodies lie in their wake, but the Forsaken Motorcycle Club isn't done yet. Carlo Mancuso still needs to pay for his sins. Nobody knows that more than Ian Buckley, the Treasurer for Forsaken.

Ian prefers his pleasure mixed with pain and he's only ever at peace when he's doling out justice. Convinced that he's too unstable and sadistic to take an Old Lady, he keeps his trysts, like all of his relationships, brief and anonymous. But with his club at war, and the stakes being so personal, Ian's feeling the events around him more deeply than he expects.

Mindy Mercer is the sweet daughter of Fort Bragg’s most respectable cop. At least that’s how the town sees her. Very few people know the Mindy who hides her tracks and battles her cravings by lying to everyone around her. She thinks she has control of her addiction until she suffers an attack that leaves her searching for a way out of her own personal hell.

Mindy has never been more desperately in need of a savior and Ian has never seen a more beautifully destroyed creature in his life. Their attraction is intense, but their damage is extreme. Some scars never heal, and some people never get better.
Love is never more painful than when it can kill you.

What are you waiting for this Wednesday? Leave me a link so I can come visit your post! :)