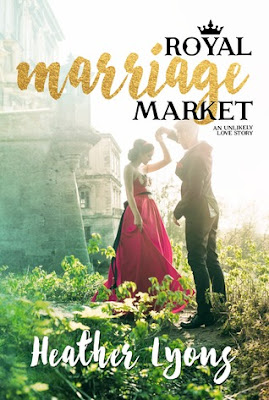 Fans of The Royal We will not want to miss this epic love story!

Every decade, the world’s monarchs and their heirs secretly convene to discuss global politics and social issues—and arrange marriages between kingdoms.

Elsa may be the Hereditary Princess of Vattenguldia, but she finds the entire situation archaic and unsavory. While she wants what's best for her country, she isn't about to jump into an unwanted relationship—let alone a marriage—with a virtual stranger. Of course, her feelings matter little to her parents, whose wheeling and dealings over trade pacts and alliances achieved at her expense begin the moment they set foot in California for the Summit. So when a blindingly handsome royal runs into her, she doesn't hesitate to tell him there's no way she's marrying him.

Christian is all too happy to agree: no marriage. As the Hereditary Grand Duke of Aiboland, his main goal is to get through the summit without a bride being foisted on him. Which is why he suggests they help each other field potential intendeds. As Christian slowly gets to know Elsa, though, he realizes they have a lot more in common than just their feelings about the Royal Marriage Market. Only he can't fall for her, because royal or not, they're not meant for each other.

Elsa and Christian will have to evaluate matters of the heart verses those of state and crown, and decide whether or not tradition trumps love.

The first time this book came into my orbit I immediately had to get my hands on it. The gorgeous cover, the title and then that blurb that gave me that feel of all those historical romances I love to read so much but with a modern twist. It just sounded like so much fun. However, while I was in very deep like with it...I didn't actually love it as much as I wanted to. And parts of it just left me feeling all out frustrated.

I need to clarify up front that none of my negative feelings toward this book have anything to do with either Elsa or Christian directly. On the contrary, I adored them to absolute pieces. Matter of fact just a few pages in and after having been introduced to Elsa, my first thought wasn't "I love this girl" it was more along the lines of of "I absolutely fucking love this girl." I also felt those instant feelings towards Christian as well. He's on his very own level of swoon worthy. And while I'm putting it all out there I shipped these two just as hard, if not even harder in some cases, as I have ever shipped any of my favorite fictional couples. I needed these two characters to be together almost as much as I needed air.

So, no. There were no flaws where they were concerned.

The thing that ended up sucking so much joy out of this book for me was Christian's mother of all people. She was just such a vile and disgusting....person. (I was tempted to call her a monster instead.) If the fact that she seemed to take such joy in, what I can only describe as emotional terrorism against her own children weren't bad enough, she spoke to her sons in a way that no mother ever should speak to her own flesh and blood. Shortly after we meet Christian, she says to both him and his brother Lukas, "Think about all the pretty girls that will be present. Why, I can only imagine how eager they'd be to open their legs for you." and I was so very nearly close to being done. If I'm being honest, I probably should have been. But I wanted to really give this book a shot and the benefit of the doubt. Trust me when I say that she never got any better.

Thankfully, Christian and Elsa were enough of a draw to keep me turning the pages and the desire to know how their story would end was strong.

I loved how their story played out. From the hilarious first meeting, to the innocent, though extremely reluctant moments of initial flirtation, to the all out sizzling chemistry and delicious sexual tension that builds to the point of all out frustration on my part. Add to it the fact that in a lot of ways it's a forbidden relationship they're dancing around and I was totally gone over these two.

Even the moments that were, if I'm being honest, kind of cheesy between them, what with all their silly little inside jokes. All of my Christian and Elsa feels completely overshadowed those moments and all I needed and wanted was just more of them. More!

I also loved Christian's brother Lukas and all his playboy ways and then both Christian and Elsa's personal secretaries, Charlotte and Parker. Parker with all his seriousness and adhering to propriety as much as possible but yet you could still see his fun side and how even though he was all of those things, Christian's happiness was what he was most loyal to. And Charlotte and how she was such a force and how even though Elsa was her princess and her employer, she wasn't afraid to speak up, very loudly, and call her on her garbage. All three added some much needed laughter to the book in their own ways just when I needed it the most.

Truly, as you can see I did not hate this book. I think maybe if Lukas and Christian's mother hadn't been quite so...so...ew, this would have been an entirely different review all together. Still, there was enough on the romance front to make it worth all the cringe worthy moments she made an appearance in. I couldn't get enough of them and still want more!