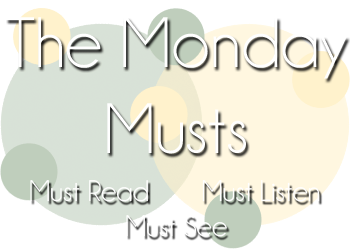 The Monday Musts is a new feature created by Jessica from Lovin' los libros where we share with you each week all the musts you're missing out on. The must reads, the must listens, and the must sees (This can be ANYTHING that catches our eye. Other blogs, bookish things, pictures, etc)

Now I have debated making this series one of my "must reads" ever since I  put up my first post last month. And not because I don't feel like it's worthy of being here, it's more of the that fact first, epic fantasy isn't exactly everyone's cup of tea and second and more importantly...that this series can, and has, intimidate people. I mean it's 14 books. But not only that the first book alone, at least in mass market paperback form, is over 800 pages. And that is a pretty normal length for each book. Hell if it weren't for the fact that I've already read and loved the first 6 books...more than once, I would probably be scared of them as well. But I have and I love them deeply. In fact I may end up saying screw it for a few of my challenges this year and knock my GR goal down some and finish this series once and for all. Now that all the books are out I have no more excuses! Plus my heart really wants it!!

Oh and just a quick note...the last 3 books Brandon Sanderson was picked to finish writing in the series after Robert Jordan's passing. I'm just sayin. For all you Sanderson fans out there.

"Weight of it All" by Handsome Ghost

For the last 4 days this song has been on repeat nearly all day every day. No joke...I've even fallen asleep to it. It's playing as I type this up. I'm currently hooked! I don't know any other songs that I'm aware of at least. But I'm sure I'll eventually investigate further since I love this one so much!

I thought this cartoon from Sarah Andersen was not only hilarious but 100% accurate. I'm sure you'll all agree lol

Her tumblr and her upcoming book on Goodreads