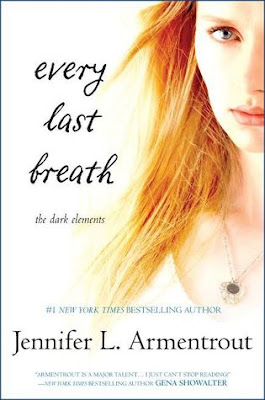 Some loves will last ’til your dying breath

Every choice has consequences—but seventeen-year-old Layla faces tougher choices than most. Light or darkness. Wickedly sexy demon prince Roth, or Zayne, the gorgeous, protective Warden she never thought could be hers. Hardest of all, Layla has to decide which side of herself to trust.

Layla has a new problem, too. A Lilin—the deadliest of demons—has been unleashed, wreaking havoc on those around her…including her best friend. To keep Sam from a fate much, much worse than death, Layla must strike a deal with the enemy while saving her city—and her race—from destruction.

Torn between two worlds and two different boys, Layla has no certainties, least of all survival, especially when an old bargain comes back to haunt them all. But sometimes, when secrets are everywhere and the truth seems unknowable, you have to listen to your heart, pick a side—and then fight like hell…

I have to make a confession. I feel like I have committed a huge, bookish cardinal sin. Maybe I should explain the reason before I just blurt it out. See this book has been weighing on me. The whole Roth versus Zayne thing has had me more freaked out than normal to finish a series. I love a good love triangle but this one is so different because I was not putting my trust in the author to make a decision on how this would turn out, I was putting it in my peers. That's a tough pill to swallow! And if I'm being honest...had I known that before I ever read the first book...I might have never started this series in the first place which sucks to even think about. This whole thing is the reason that, even though I pre-ordered Every Last Breath and received it on release day, I waited until now to finally stop procrastinating and just finish the series.

I was only about 15-20 pages in but I just couldn't put my heart into it. It wasn't holding my attention. My brain just kept going Zayne? Roth? Zayne? Roth? Zayne? Roth? It just wouldn't stop! I needed to know so I could quiet my head and embrace this book fully. I knew deep down that either way it went, no matter what would happen with my ship I would be able to finish the book in peace if only I knew.

I stopped where I was...and read the last page before I went on.

I know! I feel so wrong saying it! Unclean. But you know what? It worked.

Okay. Enough of being silly. I really won't be able to say a whole lot about this book since it's the final book in a series so it's hard to come up with a lot to say that wouldn't be spoiler-ish in any way. Even though on the inside my heart is screaming all of the things that it wants me to talk about.

Once I finally got into it this book was really hard to put down. It's been a while since I finished the previous books so I was worried going in that I'd feel a bit lost without going back and rereading. But it didn't take long before I fell back into this world easily and everything came rushing back.

What I love about JLA's books is that she knows how to write a really strong and ass kicking heroine. Layla is no exception. I feel like this final book is where I loved her character the most. She had so much weighing on her throughout the entire book and I loved how even though she was scared on the inside, outwardly she rarely let that show and she had her head on straight when I feel like the average person would crack under everything that was on her shoulders and in her mind.

The other thing I love about her books is her boys. She writes the boys that you instantly fall for, the ones who even when they're being cocky as all hell make you want to smile and sigh and make you fall even harder. Roth and Zayne are both perfect examples. They both have such good qualities to them that deep down I knew that however it went I could've been happy. Though I did have my hopes set a wee bit higher on one side before going in. But that's all I'm going to say about that.

It's difficult to really try to think of anything else to say. I mean there's a million things I'd love to go on and on and on about but this review would end up way too long and...you people who haven't read this one yet would end up hating me for saying to much. So I'll just leave it at this.

This book, heck this whole series, had everything I've come to expect from Jennifer L. Armentrout. An ass kicking, badass heroine. Swoon worthy guys you'll lose your heart over. Hilarious banter and laugh out loud moments. It filled me up with so many different emotions. One minute I'd be laughing so hard and the next my heart's being ripped out of my chest. You really feel everything when you step into one of her worlds and I couldn't have asked for a better conclusion.