REVIEW: Since You've Been Gone by Morgan Matson 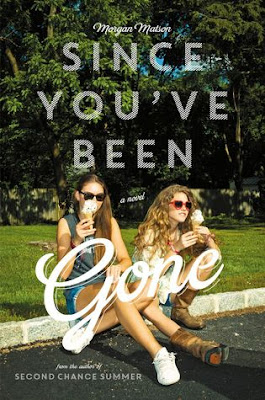 It was Sloane who yanked Emily out of her shell and made life 100% interesting. But right before what should have been the most epic summer, Sloane just…disappears. All she leaves behind is a to-do list.

On it, thirteen Sloane-inspired tasks that Emily would normally never try. But what if they could bring her best friend back?

Dance until dawn? Sure. Why not?

Emily now has this unexpected summer, and the help of Frank Porter (totally unexpected), to check things off Sloane's list. Who knows what she’ll find?

Do you know how nerve wracking it is to go into a book that everyone loves? Seriously. Everyone loves this book and Morgan Matson in general. I was really nervous that I was going to find it overly hyped. I mean, I have previously read Amy & Roger a few years back and while I had liked it I didn't love that one as much as everyone else seems to do. If you were to ask me if I thought you should read it my response would probably be, "eh, if you want to" as I shrugged it off. It was cute but I wasn't a huge fangirl. So knowing that added even more to my nerves. But I grasped on to those few shreds of hope that I had because of the fact that that blurb was just so intriguing!

I think initially I allowed all that doubt and worry shadow my reading experience. I started out not liking Emily. I felt like she was being overly dramatic and had some intense codependency issues. Which granted I still feel were true in the very beginning and sporadically throughout the rest. But as the book wore on I actually really started to like her. It was fun to watch her blossom and embrace the things that would paralyze her with fear...eventually. She went from someone I felt was too timid and slightly annoying to someone who was fun and exciting and I was cheering for as I went on.

I loved, loved, loved the whole concept behind the to-do list. When you first see the list and the thirteen items on it a bunch of them make no sense at the time while others, the ones listed above being a perfect example, are crystal clear. But I loved the fact that there were some that didn't mean anything at the beginning. It was fun trying to puzzle them out before they were eventually revealed. (Which I did not accomplish by the way haha) But it was also fun because even though Sloane isn't there as Emily goes on this summer long adventure in finding herself, and hopefully her friend, you get to know the crazy, free spirited Sloane as well as Emily ticks each item off and learn what each one of the them means to both of them.

I shipped Frank with Emily so hard from the moment he appears in the book. He's one of those genuinely good guys. It's his sweet thoughtfulness and how full of ambition he is. Or the fact that he seems to be at ease in any setting. I loved how easily he pulled Emily into his life and kind of became her new rock and helped her grow and encouraged her.

There was a huge number of supporting characters as well that were each so different and full of personality that really added some fun to the story as well. Everyone was just so much fun that I didn't want this book to end. Quite a difference from when I started it that's for sure!

Even though Since You've Been Gone started out a bit rough for me, it didn't take long until I fell under it's spell and absolutely fell in love with it. I wanted to be friends with all the characters and wished I could have had that crazy unexpected summer along with them for real! Mostly this book was just plain fun. It tugs at your heart in many different ways and had me sad to see it end. I now can't wait to jump into my next book by Morgan Matson!