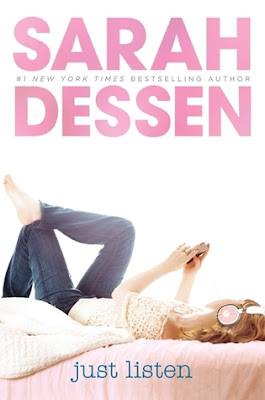 To find the truth, you've got to be willing to hear it.

When she's modeling, Annabel is the picture of perfection.

But her real life is far from perfect.

And most of all, he's determined to make Annabel happy...

I will admit that I was pretty intimidated and worried before starting Just Listen. I feel like if you're a huge reader and most especially a part of this community, and let's face it if you're here and reading this you obviously are since my blog isn't exactly a huge thing, then you know the name Sara Dessen. I mean, look at that cover up there. The book title is just kind of there small and tiny and the thing that really pops out at you is her name all big and bold. I could probably barely count on one hand the number of bad things that I've heard about any of her books and even then it would be a struggle to think of something.

So much hype but in my case it's all in the name. Until finishing this I couldn't have told you a single one of her book titles off the top of my head or what they were about except for the fact that she writes good contemporary romances and possibly they were YA or at least some of them were. That's a lot of pressure going in! I knew I always wanted to read one of her books though and so one day when I found a few of them on BookOutlet I thought why not?

Sticking with the whole honesty route, things were just kind of average in the beginning. I wasn't immediately feeling anything special. I was enjoying it but it was just a plain old contemporary for me. And if you asked me I couldn't put a finger on the moment when that changed for me. When something inside of me clicked, all I know is all of a sudden I just...got it.

I don't think I've ever identified more with a character or felt that deep connection with one as I did the more I go to know Annabel. Well, except for the fact that she's a model which I obviously wouldn't connect with and this one traumatic event she goes through. But that aside, the more I read the more I thought this was me in high school, eerily so. I had my own Sophie and I lost my own Clarke because of my Sophie. Which I realize how vague that sounds unless you've read it so I apologize. But besides that it's the way that she can't deal with confrontations or how most of the time she won't always say exactly what's on her mind to avoid the possibility of hurting someone or someone being angry with her. So many things. I only wish I would've had my own Owen to help me work through it all. Sigh. Annabel 1, Sheri 0.

I had assumed before starting this book that her books would just be light, fluffy fun. And while it had it's moments there was also a whole lot of heavy that I was not expecting. And the way she dealt with it all and the way that all of her characters grew and changed felt so extremely natural and real.

I guess I should point out while talking about the heavy that there is a big trigger warning with this book in the form of attempted rape. And I hate putting it out there because it's less of a surprise but since that could be a trigger for some people I feel it's better to not go in and be surprised. Plus, honestly, it's not hard to guess the event will eventually come out. There's a sentence 24 pages in that completely gives it away in my opinion. If it's not something you couldn't figure out on your own based off that sentence, well then...I wish I lived in your happy bubble of a world where that type of thing wouldn't cross my mind. I'm not being snarky I do truly wish rape wouldn't be a thing my mind would jump to.

Just Listen took me completely by surprise. I went in expecting an average light hearted contemporary young adult book. What I got was a story full of heart and complex characters. A story that delved into both family dynamics and those between friends. It touched on a form of mental health and other traumatic situations and dealt with them respectfully and in my opinion accurately. It's relatable and real. I loved it.

Was the hype warranted? Well I've only read one book right now so I guess I'll just say that so far I'm impressed and I'm more excited to give the other 2 books of hers I own a shot!