ARC REVIEW: What Happens Between Friends (In Shady Grove #2) by Beth Andrews 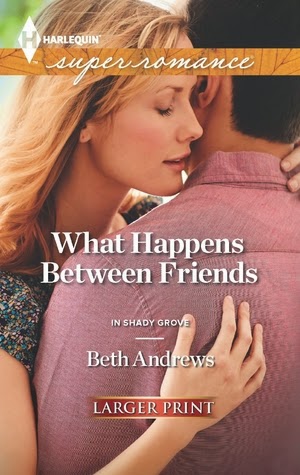 For Sadie Nixon, life is one big adventure with something new around the corner. And anytime she needs a break, she can always rely on James Montesano--the best guy she knows. This time when she arrives in Shady Grove, however, something is different. There's a little extra between her and James that has them crossing the line of friendship into one steamy, no-holds-barred night.

Afterward, no matter how hard she tries, Sadie can't erase the memories of James that way. He's so hot, so tempting.... But his life is here and hers isn't. She needs his friendship, but she doesn't do commitment. So where does that leave them? Suddenly what happens between friends is more complicated than ever!

I received a copy of this book from NetGalley and Harlequin in exchange for an honest review.

I actually got this one off NetGalley last year sometime, but life happened and the review never got written. So I figured I'd quickly skim through the book for a bit of a refresher, I seemed to find myself actually rereading it for the most part anyway because it started sucking me back in. You're probably thinking, "Brilliant! Another good one!" And while in a lot of ways it is good, I'm also starting to remember just how much this book pisses...me...off...

People didn't get mad at her. They didn't dislike her. She was Sadie Nixon, for God's sake. A ray of freaking sunshine.

This book is told from 3 different POVs, and out of those 3, only 1 of them was likable. Sadie and her sister Charlotte are 2 out of the 3 and they were both such complete nut jobs it was hard to decide who was worse. First there's Sadie. She's selfish, judgmental and she has this air of arrogance about her that was so annoying. She treated everyone in her life, friends and family alike, like complete crap. And she was usually completely oblivious and shocked when people finally stopped allowing her to mooch and walk all over them and told her enough is enough. She's so used to people doing everything for her and getting things her way that she comes to expect it and almost feels entitled. Needless to say, I did not like her much.

So she'd stretched the truth a bit. All was fair in love and war.

Now, as much as I didn't like Sadie, I think I disliked Charlotte just a wee bit more. If you want lessons on how to be a fake person read this book and study Charlotte and basically do everything she does. She, quite literally, has her entire future planned out. Down to the man she's going to marry (but he doesn't know it yet..), the ring he'll use to propose, how long the engagement will last, how many kids they will have, etc. All she needs for her plans to happen is for James to go ahead and realize she's not just a kid anymore and fall in love with her. She goes about trying to change his mind about her in a very manipulative way, in my opinion. Like, if she didn't like something she would pretend to like it in front of him hoping he'll be like 'wow we have so much in common!' Or she'd get him talking about his work, he's a carpenter, and once she'd get him going about a project he was working on, she'd zone him out because she could care less. I can't stand fake people, therefore my feelings about her never wavered. She's a whack-a-doodle.

"I've been in love with you for most of my life, and it's not going away. It may never go away, but that doesn't mean I have to torture myself by being your friend. It's not enough for me. Not any more. And it's not fair of you to ask me to pretend it is."


I seriously love James and most of the Montesano family. They were all so funny. Like laugh out loud funny. I think that's the biggest reason that I disliked the Nixon sisters so much. James was this genuinely super sweet guy and he didn't deserve any of the head games from those 2. I think James and his family, especially his brother Leo, are really what saved me from giving up on this book completely. They actually made the whole thing worth reading.

It's funny because by the time I get to the end I nearly forget all that frustration. I actually did the first read through. Before I started skimming through I'd been thinking that I remembered being happy with the end. This time around though I remembered to take better notes and such. I didn't hate it. I just feel like things would have been a whole lot easier if half of the characters central to the storyline weren't so freaking horrible. To want to see a happy ending with the people involved you have to like them even if it's just a couple of redeeming qualities you see here and there. I think if Leo gets his own book, I just might give this author another chance to win me over. If not, well I think I'll stick with just this one and call it a day.

I really fought myself with how I wanted to rate this, but I felt like all the good parts outweighed the bad and there were plenty of them. So giving it less than a 3 just didn't make sense to me.