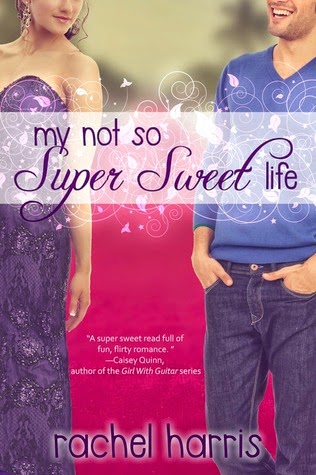 Cat Crawford just wants to be normal—or at least as normal as a daughter of Hollywood royalty can be. And it looks like fate is granting her wish: she’s got an amazing boyfriend, Lucas; her fabulous cousin, Alessandra, living with her; and her dad planning his second marriage to a great future stepmom. That is, until her prodigal mother reveals on national television that she has something important to tell her daughter…causing a media frenzy.

Lucas Capelli knows his fate is to be with Cat, and he’s worked hard to win her over once and for all. Unfortunately, Lucas has his own issues to deal with, including a scandal that could take him away from the first place he’s truly belonged.

As secrets are revealed, rumors explode, and the world watches, Cat and Lucas discover it’s not fate they have to fight if they want to stay together…this time, it’s their own insecurities.

Well, and the stalkerazzi.

I knew when that when I was finally able to start blogging reviews again, that I didn't want to start off with just any old random book. I've read quite a few books and pre-(hand)written  some reviews in my absence. All ready to be typed up and posted. But about the same time I realized only had a couple weeks left until I could finally order my new computer I happened to see on one of my rare Facebook visits, talk about the newest installment of My Super Sweet Sixteenth Century series releasing and I thought to myself...that's the one.

I will admit, I've always been really nervous about getting fully back into Cat's story. It's no secret that I was torn up over how the first book ended. I loved it, don't get me wrong. But, to keep things unspoilery for those who've not started the series yet (and if this is the case go! Go now and read them then come back! I'll wait...) Anyway. Basically at the end I was both happy from reading such a great book and yet very sad and brokenhearted as well. I was hurting for him. You know who I mean.

It was so easy to fall right into this book. Rachel Harris will forever be one of my favorite authors. She has this ability to create fascinating characters that pull you into their stories and make you fall in love. I don't know how she does it, but I hope she never stops! It's in the dual POVs of Cat and Lucas which also makes me happy. I love getting the story and emotions from both sides.

I'm still very much loving Cat. She's tough and still just a little bit guarded but there's also a pretty vulnerable, scared girl underneath the side of her she projects to the world. Things have really changed for her since we left her in book 1. All the pieces in her life are seeming to fall right into place and she's allowing herself to be more open. Things are so much better where she's concerned. It's just a matter of "waiting for the other shoe to drop." Which it does. In the form of her mother.

To say that I despise Caterina Angeli would be a huge understatement. She's like a tornado. Dropping down suddenly. Destroying everything in her path. We've heard all about her before but trust me, witnessing the real thing in action was maddening. She is such a horrible person!!

I was so worried about how I'd feel about Lucas. Let's face it, he was going up against some pretty big competition for my affections from book 1. But I went in wanting to give him a chance and like him. I was worried for nothing because it didn't take long and I was under Lucas's spell. I love how supportive and understanding he is with Cat. He would do anything for her and bend over backwards to make her happy.

Along with some of our old favorites, like Les and Austin (I miss them), we get to meet a new character. Ransom. Now, I'm not going to go spoiling the surprise and tell you who he is or  how he fits into the story...sorry, (not)sorry. He's still a bit of a mystery and we don't get to find out a whole lot about him. It feels like...maybe...he could get his own book in the future...? If not, well, no biggie, but it would have been nice to know him more. I think that's really my only complaint with this book. He has me intrigued!

All in all I adored this book and it was a perfect compliment to the series. I really, really hope that it's not the last one and we do get to have more of Ransom and maybe even the surprise person we got to hear from after Cat's epilogue. Either way, if you haven't yet, you really should give this sweet series a read. You won't regret it!