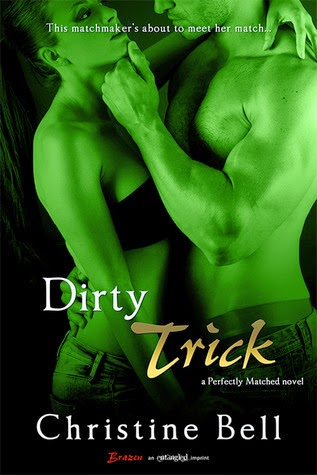 This matchmaker's about to meet her match...

Grace Love is lousy with men. She can spot a match for someone else a mile away, and her balls-on instincts are why her matchmaking business is thriving, but finding her own Prince Charming? The only guy who makes her sixth sense tingle is her playboy best friend, Trick, and no way is she risking their friendship, no matter how hot she knows the sex will be.

SWAT officer Trick Mathews is a patient guy, but Grace’s inability to see what’s right in front of her is grinding on his last nerve. Yeah, he blew his shot at breaking out of the friend zone when he tamped down the urge to lick her from head to toe the day they met, but he’s got a plan that’ll change her mind. Incognito at Salem's hottest Halloween party, he’ll show her exactly how good they could be…and that he’s the man for her.

I'm always a sucker for a good Entangled book, especially from their Brazen line. Thankfully Dirty Trick did not disappoint. It's told in the dual POVs of Grace and Trick and is one of my favorite, favorite, favorite types of love stories, the friends to lovers that always make me swoon the hardest. Grace and Trick are extremely close on top of being neighbors. He, all too late, realizes that the feelings he's having mean 'she's the one'. But Grace has already written him off as a player due to the steady stream of girls he brought home the first few months after she moved into the neighborhood. So being a man in love, he does whatever it takes to change her mind about him.

She'd had more than her fair share of bad relationships, and her ex-fiance hadn't just broken her heart. He'd obliterated it.


I really liked Grace. She has a lot of baggage due to a real winner of an ex who really did a number on her head. Needless to say, understandably, Grace has quite a few trust issues. But it's in a very endearing sort of way, one that makes her just that much more likable. I also feel like it gives her a very relatable vibe. It was fun to see the changes in her as her confidence built and she went from timid and questioning  herself constantly to putting herself out there and taking risks.

"Nope. Not my real voice. I was going for sexy and mysterious. Is it working?"


Trick Mathews. Wow. I have two words for you. Swat. Officer. Take a moment to go wipe the drool from your chin. I know I had to! Don't get me wrong, as you read in the description he pulls a pretty sneaky move to try to get himself out of the friend zone and I do realize that. But really what he does is with the best of intentions and it was never to hurt Grace. He's just this incredibly sexy, super sweet guy who'd do anything to get the girl he loves. I am smitten!

"What do you mean by special? Derek has a nine-inch--"

"I'm pretty sure I don't want to hear the rest of that sentence."


I love when books have a very bold and outspoken best friend who speaks her mind no matter who she's talking to. Serena fits that role with perfection. She's very flirtatious and funny. Of course I'd probably die a million times over if I had a friend as bold as her in real life.

He stared at her with a puzzled but patient smile. "I want your cock...a doodly doo....in-inside my p--lady area...business," she expelled in a rush.


There were plenty of giggle worthy moments as well as you can see. Aside from a couple of references and lines that were just odd or felt like they were trying too hard here and there (and honestly there weren't that many), I feel like this was a very well rounded book. Funny, sad, sexy as all hell, even a little bit of angst. I had a really hard time putting it down and it kept me sucked in to the very last sentence just dying for these two to make it work.