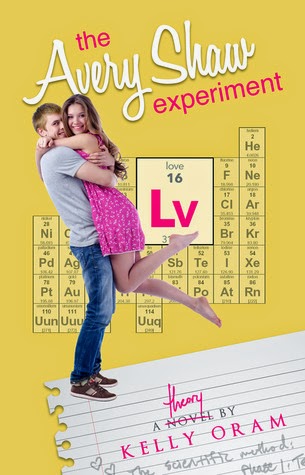 When Avery Shaw’s heart is shattered by her life-long best friend, she chooses to deal with it the only way she knows how—scientifically.

The state science fair is coming up and Avery decides to use her broken heart as the topic of her experiment. She’s going to find the cure. By forcing herself to experience the seven stages of grief through a series of social tests, she believes she will be able to get over Aiden Kennedy and make herself ready to love again. But she can’t do this experiment alone, and her partner (ex partner!) is the one who broke her heart.

Avery finds the solution to her troubles in the form of Aiden’s older brother Grayson. The gorgeous womanizer is about to be kicked off the school basketball team for failing physics. He’s in need of a good tutor and some serious extra credit. But when Avery recruits the lovable Grayson to be her “objective outside observer,” she gets a whole lot more than she bargained for, because Grayson has a theory of his own: Avery doesn't need to grieve. She needs to live. And if there’s one thing Grayson Kennedy is good at, it’s living life to the fullest.

I am hopelessly in love with this book and I'm not afraid to admit it. For the last couple of years, had you asked me "Hey Sheri, what's your favorite book?" You would have been given a very different answer. But since finishing The Avery Shaw Experiment both the book and Grayson Kennedy have completely stolen my heart. That's right there's a new #1 book boyfriend in my life as well.

I can't even really pinpoint what that one special thing is that sets this book miles apart from all the rest for me. I suppose it's all the numerous little things that, when thrown all together, left me feeling the warm and fuzzies in a big way.

Obviously, the most important aspect to any good book is it's characters. You can have the greatest story idea ever imagined, but without real, believable characters you have a bunch if words on a page that nobody wants to read. This book has believable and likable characters in spades. From Avery and Grayson (whom we get dual POVs of), to Libby and Owen and yes, even Aiden, I either love them or love to hate them.

Avery was such a great MC. She starts out so weak, and I don't mean weakly written by any means. Avery has severe anxiety and social issues. Truly, she'd been diagnosed with severe social anxiety and had medication for it. Big crowds, new people, being in the spotlight, things like this can literally send her into an anxiety/panic attack. She's very codependent, especially when it comes to Aiden Kennedy. She was like this little wounded lamb that grabs ahold of your heart and makes you want to climb into the book and protect her. The growth of beginning of the book Avery Shaw to end of the book Avery Shaw couldn't have been written more perfectly. And I feel like it was very realistic. I mean I have no experience with her degree of anxiety, but I never ever felt like 'there is no way this girl would've been able to deal with that.'

I laughed. Some stories about me were exaggerated. That one wasn't.

Grayson Kennedy. Sigh. I have this huge goofy grin as I type that name. Quite possibly the most delicious and well rounded love interest ever to grace the pages of a book. He's like... the wanna-be-bad-boy. Grayson's biggest fault is that he's never been the type of guy to be with the same girl for more than a week. But even with that against him, he never did it in the douchey way most guys in books do. For him it really comes off as no girl has ever made him want more than that before, not that he'd sworn off love for life or anything.

She said she'd never felt anything like that, but what she doesn't know is that I hadn't either. Even with the countless girls I'd danced with, or done a whole lot more with, never in my whole life had I felt a connection like I did with Avery that night.


He was just the right guy to break down Avery's walls and help her to stretch the lines of her comfort zone and build her self confidence. You know how in books you think you have this amazing guy but you know that at some point he's going to do something extremely douchey and break both the girls heart and trust and even yours? Yeah, Grayson isn't that guy. He leaves the heart breaking to the other Kennedy. He's loyal, he fights hard for Avery even at the point when most guys would have called it quits and written her off. He keeps trying until he has no fight left. Okay, okay I'm done. He's just perfect.

Damn Aiden to the very deepest depths of hell.

Aiden Kennedy...is a complete tool. Seriously, I despise him to a point where nothing he's said or done could ever make him or any of the damage he's done right in my eyes. This isn't necessarily a bad thing. I mean we all have characters that we love to hate am I right? Aiden is pretty high up there on my list. Mostly because he was so real. His actions were real. Things he said and did, it was all just so realistic. It made me almost wish he was real because I would love nothing more than to walk up and punch him in the junk for every girl who ever had her heart stomped by someone like him.

"So, beefcakes," Libby said, startling me from my Avery staring. "How's about you pick up your ball, and let's get this party started. I happen to be a visual learner, so I am quite excited to have some eye candy to enhance my learning experience for a change."

But it wasn't just Avery, Grayson and Aiden, every single character in the book was so full of life and quirks. There's Libby with her complete embrace of her dorkitude (my new word) and the way she says whatever's on her mind, no matter who it's to, with a total lack of shame. Then there's Owen who, when mixed in scenes with Libby and her boldness made some hilarious moments of comic relief. And I loved how easily Pam and Chloe opened up and embraced Avery and the way the two social worlds collide and mesh so well together.

"Definitely a cat in a past life," Owen muttered next to me. "But, like, a big scary one that ate people."

Which is one of the other little things that really had me with this book. We have two vastly different social circles. Avery, Aiden and Libby are on the nerdy, smart side. Members of the science club, entering the science fair, getting passes to the museum is their idea of a great birthday gift. Then you have the opposite side the popular, elite group Owen, Pam, Chloe and Grayson as the reigning king.  I loved that Grayson's friends weren't like dragging him aside when he brought Avery into their little click and been like "Dude, what the hell are you doing?!" I mean sure there were awkward moments and moments of total shock but Grayson's genuine charm extinguished that with ease.

This was my first book by Kelly Oram and wow am I won over. As soon as I finish typing this I'll definitely be getting my hands on others. So if you're like me, and haven't ever read one of her books yet either, then may I highly, highly suggest The Avery Shaw Experiment as your first? Try it out for the great story line and get swept away by the beautifully written characters. I don't think you'll regret it.