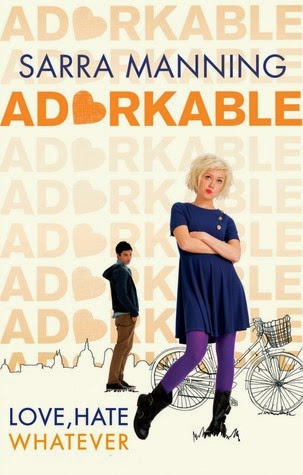 Welcome to the dorkside. It's going to be a bumpy ride...

Jeane Smith's a blogger, a dreamer, a dare-to-dreamer, a jumble sale queen, CEO of her own lifestyle brand and has half a million followers on twitter.

Michael Lee's a star of school, stage and playing field. A golden boy in a Jack Wills hoodie.

They have nothing in common but a pair of cheating exes. So why can't they stop snogging?

So in going for complete honesty here, the only reason I bought this book to begin with is its title. Adorkable. I mean it's only been one of my favorite hybrid words since forever! It was a pretty big gamble but I was going to take my chances. I wound up liking the cover as well, it was cute and stood out to me, so with book in hand I flipped it over and read the synopsis on the back cover then I was much more confident that my gamble had probably paid off.

I loved this book. If I were to make a top 10 list of the most fun books I've read to date, Adorkable would definitely make it into the top 5. There were so many good elements to it. It was laugh out loud funny, hair-pullingly frustrating, beyond sweet and at some points even a bit heartbreaking. It was the whole package.

I freaking adored Jeane Smith. She's smart, she's different, she's so full of snark that, sometimes, even I thought it was a bit too much. But still I loved her just the same. She wholeheartedly embraces her dorkiness and exudes self confidence. But in a lot of ways, most of these things sound great sure, but I feel like they were not just awesome traits, some were also her biggest faults. She was feminist yet still slightly girly-girl. There were times I wanted to yell at her, don't get me wrong I'm all for girl power and everything, but there comes a point when you have to realize that showing and/or having emotions, and accepting the fact that it's okay to need people in your life doesn't make you look like some weak woman and it takes just as much strength to say 'I need you' than it does to be independent. It's one of those rare times when you can have it both ways.

While I embraced Jeane right off the bat, Michael Lee had the opposite effect on me. I struggled quite a bit through the whole thing to like him and really root for him. And them as a couple for that matter. I mean it's hard to take his interest in her seriously when half the time in his POV he's tearing her down, in his head that is, wondering  to himself what was he doing, she wasn't even pretty, blah blah blah. It was pretty maddening. Even though I was sure that deep down he genuinely had feelings for her and that the things he thought were mostly his anxiety filled reaction to the flack he'd get if people knew they were hooking up...still it was hard to see those things and think "Okay, sure Michael. You deserve her." Look, he's not a terrible person. In the end I loved these two together and separately so it all eventually evens itself out. He's just a teenage boy who, for a while, cared more what others thought of him than opening up to the possibility of happiness no matter what the cause to him socially.

We get both POVs in this book. Which made a great storyline even better. With 2 people who equally fought their feelings for one another, it was so much fun to see both of their reactions to all the different situations. Though like I said in Michael's POV it did tend to get frustrating at times when he'd think so lowly of her. But it never lessened my liking of the book. I could hardly put it down. Super cute and fun read and I highly recommend it!

Just a quick note, the author is British so if you aren't familiar with a lot of British words and phrases then have Google handy ;). It's all fairly easy to figure out if you're unfamiliar though.