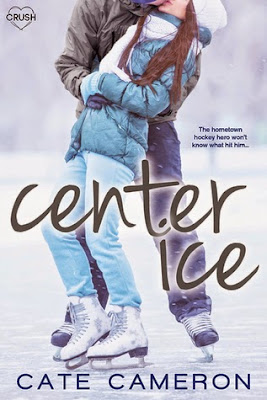 This Entangled Teen Crush book contains adult language, underage drinking, sexual situations, and crazy squirrels. It may cause you to become a fan of hockey - or at least hot hockey players.

The hometown hockey hero won't know what hit him...

Karen Webber is in small-town hell. After her mother's death, she moved to Corrigan Falls to live with strangers - her dad and his perfect, shiny new family - and there doesn't seem to be room for a city girl with a chip on her shoulder. The only person who makes her feel like a real human being is Tyler MacDonald.

But Karen isn't interested in starting something with a player. And that's all she keeps hearing about Tyler.

Corrigan Falls is a hockey town, and Tyler's the star player. But the viselike pressure from his father and his agent are sending him dangerously close to the edge. All people see is hockey - except Karen. Now they've managed to find something in each other that they both desperately need. And for the first time, Tyler is playing for keeps...

I am truly loving this surge of sports related romances that everyone seems to be jumping on lately. Or maybe they've always been around and I'm just now starting to pay attention to them. Regardless, hockey also seems to be quite the thing now too and even though I don't like to watch it I've kind of become addicted to all these books with the all the hot hockey superstars in them. So when this Young Adult book crossed my path I knew I just had to get my hands on it!

Center Ice was both very good and very frustrating. But not the kind of frustrating that had you sitting here wondering why you were reading it. It was frustrating in the fact that I easily got attached to these characters and both Karen and Tyler had so much messed up stuff going on in their personal lives and I hurt for them and I was angry for them. Well and honestly sometimes even at them. This book made me feel a lot and I loved that.

The one consistent thing that I've noticed about all these sports books is that the majority of them have a very consistent theme of some parental figure, usually the dad, who pushes and pushes their child to work harder, be the best, become a star. Really pushes isn't even a good word to describe the pressure they put their kids under. Tyler's dad is probably the worst I've ever seen in the bunch. He thoroughly disgusted me at times and made me physically ill with how much of a tyrant he was. It was never physical though thank goodness. It was all words, emotional manipulation and verbal abuse. He was a pathetic excuse for a human being. And the agent he hired for Tyler (an agent at 17? I guess hockey really is serious business!) was every bit the sleazeball his dad was almost more so at times. Every time they were around I would instantly tense up just waiting for what was inevitably to come.

I had to admire Tyler for the type of person he was despite the tremendous amount of pressure he was under. I'd have to say though that towards the beginning of the book, before Karen really came into his life, he was a bit weaker. Or more of a suffer in silence type of a person really. He always seemed like he'd rather just take what was being told to him just to get it over with and escape the situation instead of standing up and saying "it's my life, deal with it!" Still my heart really went out to him. He had so much riding on his shoulders, all the crap he was getting from home and his agent on top of trying to be the best he could be and do good for his team. It was a lot for a 17 year old to handle and I was impressed with how well he did it.

Karen's character and situation was a bit more difficult to maneuver. There's a lot more going on with her family besides what you get from the blurb, well obviously. It goes much deeper and is way more intense than simply a girl trying to find her place in a perfect family with a dad she doesn't even know. What was so frustrating was, even though I understood Karen's anger and attitude and it was very typical teenage girl of her, I would get so mad and irritated at Karen every time she lashed out. Her stepmother, Natalie, tried so hard and worked so hard to make things smooth and Karen feel comfortable and I could feel the genuine place it was all coming from even behind Karen's snark and rudeness at times. Even though I could understand where all of her hurt and anger was coming from it always upset me when she would lash out, most especially at Natalie and throw some of the err...family problems, in her face.

This wasn't light and fluffy. It dealt with some emotionally tough situations  with both characters. But I really liked that about it as well. Sometimes the light and fluffy are what does it for me when it comes to Young Adult but I love that this one was more intense and delved a bit deeper beneath the surface. I loved how much it made me feel. I am looking forward to following the rest of this series as it releases and I'm really excited for Chris Winslow's story next. He seems like he is going to be a whole lot of fun. I really enjoyed briefly getting to know him in Center Ice. All in all, a bit frustrating at times, in a good way, but I think I'm already hooked!