ARC REVIEW: World After (Penryn & the End of Days #2) by Susan Ee 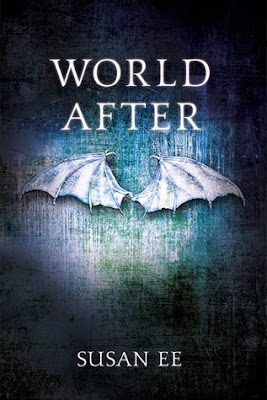 In this sequel to the bestselling fantasy thriller, Angelfall, the survivors of the angel apocalypse begin to scrape back together what's left of the modern world.

When a group of people capture Penryn's sister Paige, thinking she's a monster, the situation ends in a massacre. Paige disappears. Humans are terrified. Mom is heartbroken.

Penryn drives through the streets of San Francisco looking for Paige. Why are the streets so empty? Where is everybody? Her search leads her into the heart of the angels' secret plans where she catches a glimpse of their motivations, and learns the horrifying extent to which the angels are willing to go.

Meanwhile, Raffe hunts for his wings. Without them, he can't rejoin the angels, can't take his rightful place as one of their leaders. When faced with recapturing his wings or helping Penryn survive, which will he choose?

I received a copy of this book, from NetGalley and the publisher, in exchange for an honest review. In no way did this sway either my review or my rating!

If I thought that Angelfall was dark and disturbing, it really has nothing on World After. I'm now torn between allowing my heart and my mind time to recover before picking up End of Days and desperately needing to just jump right in and see how this all comes to an end. It's almost a given that the latter will win out in the end.

It was such a roller coaster reading this book. Things would be absolutely grim one moment and all of a sudden something good would happen. I'd have moments of joy and allow a smile to break out on my face, and I do mean moments, only to have something else come crashing down, sometimes literally, and knock that happy moment into the dirt. Worry and dread slowly ate away at me and I was almost permanently perched on the edge of my seat through the entire book. But I loved it. I loved feeling all of those things.

I've talked before about how much I sometimes love reading all things cute and fluffy. But there's that other side of me that enjoys the darkness and being shocked nearly to my core. And that's exactly what I've been getting with this seres. I mean, the angels do some horrible, horrific things to the humans. There's torture and a lot of bloodshed. A lot. It's graphic and so brilliantly written. I fully admit to having some pretty freaky angel dreams after these first two books. The kind that make you sit up, heart pounding and praying it was all just a dream.

Besides being scary and intense, it has also ripped my heart out on more than one occasion. For instance, Penryn's sister Paige's story is absolutely heartbreaking. Just about every moment she was in a scene she ended up bringing me to tears. Just thinking about Paige right now makes my eyes well up with tears. And then there's Raffe and all the things he's going through with his wings and his loss of self. Even though Raffe is part of team angel I have grown very attached to him. Oh who am I kidding? I love the guy. Err, angel.

It isn't all doom and gloom though I should probably point out since that's all I've gone on and on with to this point. Penryn is still a kickass heroine and I freaking adore her. She's actually more like the reluctant heroine. All she really wants is to get her family together and keep them safe and yet, even though she hesitates and argues with herself and says she won't do anything, she can't seem to not help others she stumbles upon that are in trouble. Even if it puts herself in the path of danger and risks that end goal she has for herself and her family in doing so. I love that about her. She tries so hard to be selfish and to her very core she ends up being selfless. Plus she's sarcastic and funny and tough as nails. Just very well rounded.

I must say some of my favorite scenes happen between Penryn and Raffe though. I feel like I need something to happen between these two like I need air to breathe. The possibilities of what could be are what keeps my heart beating. The problem is I'm not sure how in the heck that is even going to be possible. It's like the ultimate forbidden romance and Raffe is the ultimate rule follower. My heart can't help but want it wants though. But it isn't just the feels or possibility of romance because even if it doesn't happen I will live. It's their connection and understanding, the sense of teamwork and the way they push each other's buttons that make me crave their scenes together.

I feel like I've probably droned on enough and I'm itching to start End of Days! So, in a nutshell, I loved this book. It was intense, heart pounding, horrific, heartbreaking, funny...just so many different things. The writing and the characters are brilliant. And I can't wait to see how this series comes to an end. I'm sure things will get much worse before they get better and I'll be just as much on the edge of my seat as I've been up to this point and I can't wait!