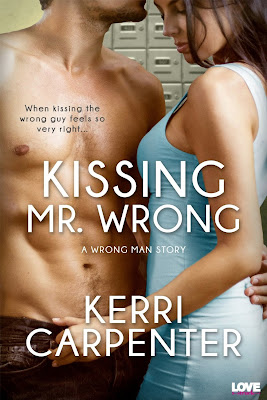 Three months ago, graphic designer Vanessa Hewitt slept with the ridiculously hot guy she met after nearly falling to her death while stargazing on a bridge. The adrenaline-fueled night of we’ll-never-see-each-other-again sex fulfilled every fantasy, but with her best friend’s wedding on the horizon, Vanessa can’t stop thinking about what would happen if her sexy stranger passed through town again.

Haunted by his time in Afghanistan, soldier John Campbell returns to his hometown just long enough to help plan an engagement party for his sister. When he realizes her best friend is the sweet one-night stand he's been fantasizing about for months, he’ll do anything to have her again…though getting trapped together in a storeroom wasn't quite what he had in mind.

Vanessa is in hell. Or is it heaven? Because with every touch, their forbidden connection grows, until kissing Mr. Wrong starts feeling more like kissing Mr. Right...

I didn't realize how very short this book was before I started it. Like 120 pages short to be exact. So even though it was very sweet and very swoon worthy, it was also very rushed. I did enjoy it but I do also wish that it had been longer and not so much in the insta-love category.

I thought both the characters were great from the little bits and pieces I was able to get from them. Though I was told things more so than I was shown I feel like. Like the fact that I was told that Vanessa was always pretty responsible and a rule follower, sort of a serious person. But the first I see of her she's having a very steamy one night stand with an incredibly sexy stranger. (John of course.) She observes that it wasn't her usual behavior but she just couldn't help her attraction to him and she wanted to be in the moment for once. Yet we never really get to see that other side of her, the one that she claims she is, which I would have liked to have seen. Still she's quite a fun character to read.

Once again I'd say John's character was great and he was beyond swoon worthy, but because the story was so short there really wasn't much of a chance to give his whole troubled soldier angle of his character it's full potential. I mean, he has these torturous types of memories from his last mission in the Army but because there just isn't enough room in 120 pages to delve too deeply into all of that he's just sort of better because of Vanessa and able to open up and so on. It would have almost been better to leave the whole soldier with a past thing out of it because I was way more into the whole best friend's brother trope anyway, it is one of my favorites! Regardless of all the rush I feel like there was definitely something between these two, like they just fit together. And their chemistry was absolutely sizzling!

I feel like I'm being so repetitive in this review but any time I have something I want to talk about that I liked there's just this huge bad spot hanging over it that all keeps coming down to: I liked this or that but...there just wasn't enough time. There was no major angst, the big scary monster that feeds my soul. Everything just sort of fell into place so easily and resolved a few pages after it fell apart. Had there been more of a fight, more of a push and pull, issues been deepened and explored further and causing greater conflict I could've gone closer to 5 stars easily. It was just that good and had so much potential. As it is now I blinked and it was done. I started it after lunch and was done long before dinner.

The writing was great, the storyline was lots of fun and the characters were so easy to like and fall and root for. If you're looking for a very quick and light and fun romance then I really do recommend it because I loved everything I read. I just wanted more of it! There's no question that I will be looking for more of Kerri Carpenter's books in the future!