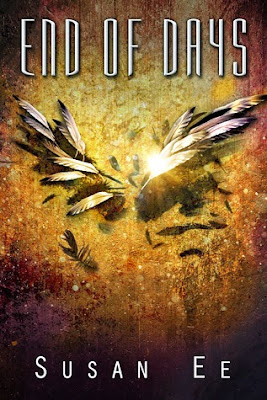 End of Days is the explosive conclusion to Susan Ee’s bestselling Penryn & the End of Days trilogy.

After a daring escape from the angels, Penryn and Raffe are on the run. They’re both desperate to find a doctor who can reverse the twisted changes inflicted by the angels on Raffe and Penryn’s sister. As they set off in search of answers, a startling revelation about Raffe’s past unleashes dark forces that threaten them all.

When the angels release an apocalyptic nightmare onto humans, both sides are set on a path toward war. As unlikely alliances form and strategies shift, who will emerge victorious? Forced to pick sides in the fight for control of the earthly realm, Raffe and Penryn must choose: Their own kind, or each other?

I have no idea how I am going to write this review. It's so hard to find the words to say for a book at the end of a series, especially one that has just recently been released. There are so many things that I want to say but can't because I won't be that person. Now that I am finished, all I can think is that I feel like maybe I read them too fast. I should have slowed down and savored them. But that feeling, that drive to get to the end and see how everything would turn out wouldn't allow me to do it. Sigh. And now the only thing that's coming to my mind at the moment is...holy crap...that was amazing. I can be quite eloquent when I want to be no?


But the glorious elation ends too soon.

Through this entire series the one constant thing I could count on was the fact that for every minor good thing that happened, the terrible, heartbreaking and sometimes outright scary would always come back moments later in double doses. I'd feel brief moments of hope and joy only to be struck down with grief and despair in the blink of an eye. It kept me on the edge, never quite relaxing. Kept my mind spinning and captivated. Pushed me with the need to read faster, if only to see if there could be a way out of all the destruction and devastation and hopefully find a happily ever after.


"You won't always be fighting, Penryn. There will come a time when you'll be so bored that you'll wish you were fighting."

I'm really going to miss Penryn. I have no doubt that she is going to be one of those very memorable, ass kicking characters that I won't ever forget about. Her name will be one of the first ones I think of when talking about favorite characters. I mean, even when things were incredibly bleak and she would be thinking things like this is the moment I'm going to die, she didn't just roll over and let it happen. She fought and she fought hard. She is made of nothing but awesome!

Raffe's character was so bittersweet for me. I couldn't get enough of him but it was also heartbreaking the more I got to know him. He spends so much of this series outside of everything. Not fitting anywhere, well, except for maybe with Penryn but even that was a struggle more often than not. He was adrift and struggling with his sense of self and fighting his own battles to get all of that back. Raffe is fierce with a strong sense of loyalty, he's funny and sarcastic as hell. He was very complex in this very frustrating but good way that made it hard not to fall in love with him.


"A chick's a chick, man, regardless of her age. And an offer is an offer." Dum nods.

There is such a huge cast of characters that makes up this series, and you get to meet a whole bunch of new ones in End of Days on top of that. But it's such a vast variety as well. There are those that had me laughing more often than not like the twins, Dee and Dum. Yeah, you read that right. Think Fred and George Weasley in an apocalypse. They were favorites. Then there were the ones that were heart wrenching like Paige, who the thought of, days after finishing, still brings tears to my eyes. That girl is just as scrappy and tough as her sister. And a whole slew of the ones that had you feeling that burning hatred deep to your core. More of those than I want to try to count. It's quite a mix bag of love and hate.


"His brothers will keep him from falling."

What surprised me most as I made my way to the end of this series was the one death that I mourned and the one that I didn't. It was easy to think that by the time I made it to the third and final book that I would have a good grasp on each one of these characters and see how they tick. Feel secure in feeling one way or another about them. But then I sat here with tears streaming down my face over the death of someone I hated from the beginning, and it made me understand just how complex each one of these characters are. He was horrible and did terrible things and I guess I really wasn't necessarily mourning the loss of him as he was at the time of his death but who he could have been but wasn't able to become because of one tragedy after another. The other character I just felt indifferent to their death, equally surprising. It was just kind of an oh-that-sucks moment without even a twinge of feeling. A lot of unexpected in this series!


It's hard to believe that we used to live in a world where complete strangers would have given him medicine and hooked him up to machines to monitor his condition. They would have looked after him around the clock. Absolute strangers who knew nothing about him.

I should probably go ahead and wrap this up because this review is already way longer than I imagined I'd be able to get it. I guess I had more non-spoilery types of things to say than I first thought. I won't get into the did they or didn't they find a way to make things work on the relationship between Penryn and Raffe. That's something you're going to have to read about yourselves. Regardless of all of that I loved this series so much. It truly sucks that it's actually over. It makes it feel like something is missing from my life. Sigh. Susan Ee's writing has been beautiful and brilliant from beginning to end. I loved everywhere she took this series. All those incredible highs and dark and gut wrenching lows. This is a series not to miss and I cannot recommend it enough!