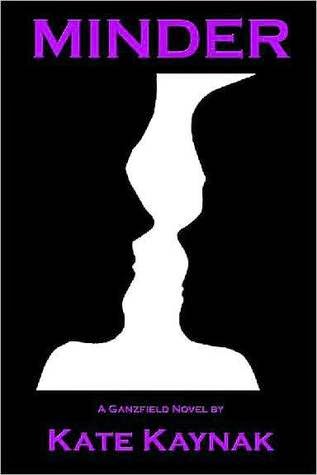 Sixteen-year-old Maddie Dunn is special, but she needs to figure out how to use her new abilities before somebody else gets hurt. Ganzfield is a secret training facility full of people like her, but it's not exactly a nurturing place.

Every social interaction carries the threat of mind-control.

A stray thought can burn a building to the ground.

And people's nightmares don't always stay in their own heads. But it's still better than New Jersey, especially once she meets the man of her dreams...

I literally had like $3 and some change left on one of those prepaid Visa cards the other day and it's not like you can get a lot with that so I did what any normal book nerd would do and thought to myself... "To Barnes & Noble!" (or insert your favored ebook shopping place :here :D)  Minder was one of the suggestions they gave me based off of previous purchases and it sounded interesting enough. Interesting? Pfft...try frickin' AMAZING!

It pulls you in from the very beginning with Maddie, the main character, going through a highly traumatic situation causing her to be spirited off to Ganzfield. Think, smaller scale Hogwarts but with more of a reform school type of vibe. (In my opinion anyway!) A place where young people with special abilites like herself go to be trained and go to school. But just when she's starting to feel like maybe she's found someplace safe and good, she realizes things inside Ganzfield aren't exactly what they seem. People are controlled with fear and not by who you'd expect.

Then she meets Trevor. (Ohhh Trevor. I've definitely collected him into my group of book boyfriends :P) Anyway! The bond that Maddie and Trevor share is simply amazing. I swear every time they were in a scene together I would let out one of those dreamy sighs and I'm sure I had a silly grin on my face. I just love these two. And they really brought out the best in each other and strengthened each other.

Another character I highly enjoyed was Dr. Williamson. In part because of the bond that he shares with Maddie as a fellow Minder and in a paternal sense. But mostly... Every. Single. Time. He would blurt out the "What happened in the library?!" stuff..I  would quite literally laugh out loud. And not just a little snicker either. It was an all out burst of laughter. I don't know why, but it just really had this great comedic timing to it that tickled me.

I am really frustrated with only one thing. WHY CAN'T WE "SEE" SETH?!?!?! Okay. Just had to get that out there. I guess it's kind of fun having someone who we only "hear" their thoughts. Adds an air of mystery. It gives me someone who I'm not quite sure about yet. Is he someone who's trustworthy? I guess we'll see. Is he always going to be the voice in our heads? Kinda reminds me of that show Home Improvement years back, with the neighbor whom all you saw was his eyes, they always had something blocking everything else on his face. That's Seth in this book to me. I guess time will tell!

I cannot recommend this book enough. I immediately bought the rest of the books that are out so far, and am excited to start reading them! I think I've found a new obsession! :)