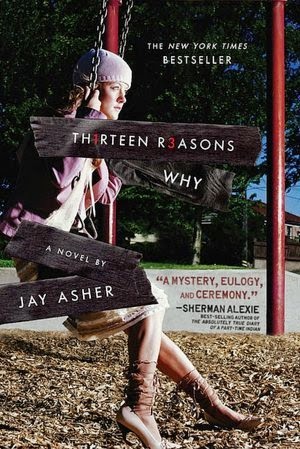 Clay Jensen returns home from school to find a mysterious box with his name on it lying on his porch. Inside he discovers cassette tapes recorded by Hannah Baker—his classmate and crush—who committed suicide two weeks earlier.

On tape, Hannah explains that there are thirteen reasons why she decided to end her life. Clay is one of them. If he listens, he’ll find out how he made the list.

Through Hannah and Clay’s dual narratives, debut author Jay Asher weaves an intricate and heartrending story of confusion and desperation that will deeply affect teen readers.

I can say, with much confidence, that at any point from now and in the future, if anyone ever asks me what my favorite book is I will say "Thirteen Reasons Why" by Jay Asher.

I've had books touch me before but nothing could have prepared me for something like this. Not because I can relate to the topic matter. Well, I guess in a very miniscule sense I can, but in a much more removed way. I've only had someone who means something to me, have someone who meant something to them, take their life. But you don't have to have suicide touch your life in any way to fully appreciate this book.

Jay Asher is brilliant and he tells a story so beautifully that you feel like you're there, right along side Clay, listening to the tapes and working his way through town as Hannah tells the story of how thirteen different people helped to pull her into a downward spiral from which she saw no hope of ever coming back up. It's like that game Jenga. You pull out one block and it's really not that big of a deal. But the more you remove, the less stable the structure becomes, until finally...it falls.

Such an amazing book. I'll probably catch hell for saying this, but I think a lot of teens would benefit from reading this story. One could hope that reading it and seeing how their actions, even the smallest ones, can really affect someone. I realize there's always going to be bullies out there, people who can't be happy unless they tear others down and a story like this won't touch everyone as much as it did me, but like I said, one could hope.

It's a very realistic story and because of that it's very emotional but I cannot say this enough...you must read this book. And then after you do... do something nice for someone, say something nice to someone or even start with smiling at a stranger. You never know what a difference a smile can make :)