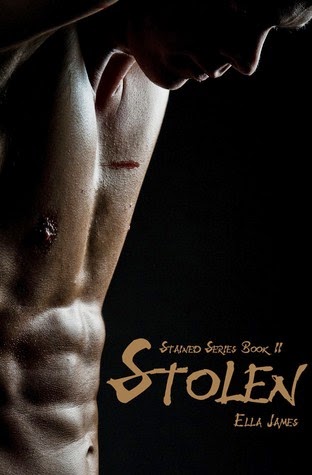 With Cayne's fate in the hands of his enemies and Julia spirited away to the covert Stained compound, the two are separated by impenetrable walls and a gulf of unanswered questions. Soon Julia learns the truth about the Stained and the plans they have for her, the compound is attacked, and a new group is running from an unwanted destiny, searching the globe in pursuit of the knowledge that just might save them all.

This second book in the Stained series definitely does not disappoint! Julia goes through so much and I really felt for her. I mean who do you trust? She finds others like her. But...they kidnapped her. Brought her to a compound that she's not allowed to leave. They won't answer many questions because information is on a "need to know" basis and has all the makings of some crazy cult. And then there's Cayne. Whom she loves very much, yet he spent nearly 200 years killing those of her kind. But it's what he was taught, what he was told he was born to do. She wages a heartbreaking inner battle about her feelings for Cayne now that she knows the full truth about his murderous past.

Some new and fun characters were introduced. Meredith I adore. She's quirky and very entertaining. One of those people that you wish you had a friend like them! Drew is great too. I was so glad he was by Julia's side. And then there's Nathan...I'm not sure how I feel about him. I really want to like him and trust him and I feel like maybe he could be one of those people you hear about who grow up in a cult and so it's all they know and he's trying so hard to be what they expect of him. I'm hoping that deep down there's more to him and he'll know he's wrong...I guess he's just one of those people I see there's a glimmer of good in and hope that I turn out right. We'll see!

Cliffhangers! Oh man Ms. James is seriously the master of a good cliffhanger. When you get to the very last line of this book, you're gonna be thinking "WHAT?!?!" At least that's how I was lol! Thankfully I have the last 2 books so I can now go jump in and find out what happens next.  Excellent series so far!