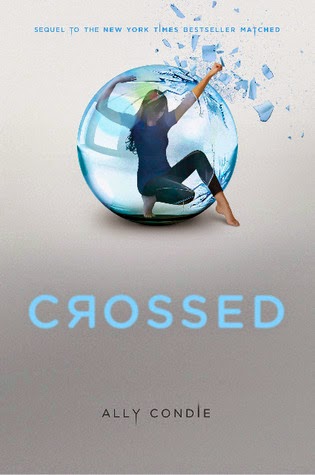 
The hotly awaited second book in the dystopian Matched trilogy.

In search of a future that may not exist and faced with the decision of who to share it with, Cassia journeys to the Outer Provinces in pursuit of Ky - taken by the Society to his certain death - only to find that he has escaped, leaving a series of clues in his wake.

Cassia's quest leads her to question much of what she holds dear, even as she finds glimmers of a different life across the border. But as Cassia nears resolve and certainty about her future with Ky, an invitation for rebellion, an unexpected betrayal, and a surprise visit from Xander - who may hold the key to the uprising and, still, to Cassia's heart - change the game once again. Nothing is as expected on the edge of Society, where crosses and double crosses make the path more twisted than ever.

Matched, the first book in this series, was my first dive into the world of dysptopian novels. It was also the first book I ever purchased for my NOOK and I fell in love with it, and the complicated and frustrating worlds created of dystopia. I have been dying to read the other 2 books in this series ever since I finished Matched. So when they came in the mail last week I quickly grabbed my NOOK and started fresh from the beginning. It was so sad to see so many 3 star and below reviews! I loved this one almost as much as I loved the first book.

One of the things I found highly positive was having each chapter switch back and forth between Cassia and Ky's POV. It was great to finally be inside his head and feel things from his perspective. Not just viewing it how Cassia interprets his actions. It was also great during the times that they switched back and forth within the same scene, to get the each  ones perspective of the current situation.

This book was so much more tense. It was much more emotional, had me in tears twice! Matched was great in that it was all about the love, old and new and the forbidden. This one is all about the struggles. Physically, emotionally. Everyone seems to have secrets. But are those secrets going to help or hinder things? There's things I still don't trust and am very frustrated about. Yet I still really loved this book. Can't wait to jump into Reached!!!