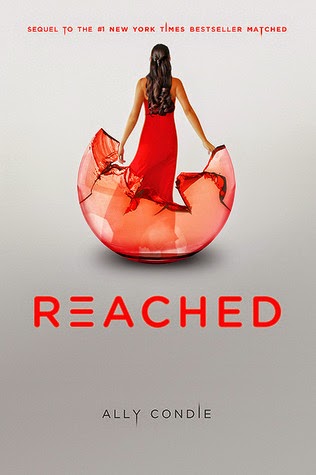 Cassia’s journey began with an error, a momentary glitch in the otherwise perfect façade of the Society. After crossing canyons to break free, she waits, silk and paper smuggled against her skin, ready for the final chapter.

The wait is over.

One young woman has raged against those who threaten to keep away what matters most—family, love, choice. Her quiet revolution is about to explode into full-scale rebellion.

With exquisite prose, the emotionally gripping conclusion to the international–bestselling Matched trilogy returns Cassia, Ky, and Xander to the Society to save the one thing they have been denied for so long, the power to choose.

Everything has a beginning. A middle. And an end. I fell in love with the beginning. It held true through the middle. And there it remained, steadfast through the end. I feel a small sense of loss now that it's over. Unless I read it again, which I'm sure I will, these characters aren't going to be with me any longer. Their story is over and it makes me a bit sad.

In this book, as I figured we most likely would, we get to hear Xander's voice as well. I am so in love with Ky, but in reading this book, a part of me couldn't help but feel for Xander. I mean he's just so good. He puts everyone before himself and even though he's in love with Cassia he doesn't act out with jealousy, he does everything he can to help her and Ky. He's just a very amazing character and the end of his part of the story brought me joy.

This is so unlike any other "Love Triangle" type of book I've ever read. The guys aren't tearing each other down and making snarky comments or anything of the sort. These three all truly care about one another. Ky and Xander formed a friendship long ago, shortly after Ky arrived in their borough and their respect for one another remained and it was a refreshing change.

There were things that absolutely made me think things like..."Omg..no way!"..like the red garden day, as an example. Those who read it will understand what I mean. I thought that was a pretty cool twist. There were lots of highs and lows. Losses and findings. Was I thrilled about everything? Absolutely not. But it wasn't my story to tell. Still I think it ended as it should. It felt about 99% complete. There were two people who were...left incomplete, but really in the end it all still felt right.