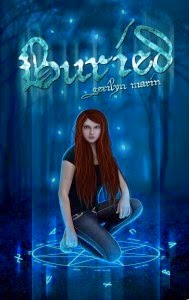 Like every resident of Fane’s Cove, Cadence McKenna knows her town is, well, odd. And yet, they’re accustomed to the near-daily supernatural happenings- so accustomed, in fact, that when Grey Addison moves to town and stays, she is shocked to find that she’s the only one who insists that there must be something strange about him.

With her life-long- if minor- psychic sensitivity handed down from her grandmother, she knows that what she feels isn’t simple paranoia. After all, how many normal guys pay no mind to random poltergeist activity occurring right in front of them?

Cadence can’t blame anyone for wanting to ignore that there might be more to his presence there- perhaps if he is a normal guy, it’s just the first sign that whatever it is about the town that drives visitors away is fading. She might have even grudgingly let it go, but then she sees Grey acting very suspiciously and knows that she can’t dismiss her feelings until she understands why he’s in Fane’s Cove. Even if it means sticking her neck out by pretending to get close to him . . . and learning more about her town’s history than anyone would ever want to know.

I found this book to be enjoyable enough. Well enough to keep me reading to the end. Was I wowed? Eh, not really. At times I felt like it was trying to do too much. Even for a paranormal some of it was just kind of... out there you know? And characters emotions ran all over the place. Overly dramatic. It felt soap opera-ish at times. Instead of "He ate a cookie." It was "He ate a cookie!" I know, my example is awesome. I mean it's AWESOME! Ha...anyway.

The somewhat confusing romance between Cadence and Grey almost seemed pointless at times and I had to wonder...does it really need to be here? And this is coming from a person who refused to read anything but romance novels for years! I mean the situation became quite annoying. You have two people who obviously are into each other. One, Grey, being more obvious about it and doesn't really care if she or anyone else knows about it. And the other, Cadence, hating the fact that she does likes him deep down, so every time she feels something for him she's mentally disgusted or disappointed in herself, which gets real old, real fast.

In order to not seem "suspicious" that she's spending time with him to investigate all the weirdness she is constantly "having to tell people" (friends, family, etc) that she's dating him. But then she gets mad at him because she's lying to everyone...because she doesn't want people to think they're dating...but she sorta likes him too...but...you see what I mean by annoying and confusing? And to top it off they're constantly either to themselves or to each other's faces talking about how "he/she is lucky their cute because they're stupid." Always with the stupid comments. I felt like we were 8 on the playground and at any minute Grey was going to pull her pigtail and push her to the ground. *Sigh* At one point, SHE gets mad at HIM and starts going off on him in the hallways at school because, and this makes SO much sense, she finds out something about her own family history and because he, a relative stranger to the town, didn't pick up on the connection and tell her about it. Hold on I need to find a pencil to jab into my brain so maybe I can make sense of that...

I felt like things were "dumbed down" for me too. Example: Cadence is going over a list and she says "a knife-though, this is Sarah, so the word used is athame" now I'm no stranger to the world of paranormal. The two people in the scene at the moment are no stranger to the world of the paranormal. So if you're having your main character explain something to me that, even if this was my first time reading something like this, I could take two seconds to look up what it means. Having your characters dumb it down for me is just a tiny bit insulting.

I know from all my complaints that it must seem sort of like "why did you keep going then?" Here's the thing, there were flaws. It took a while for things to all connect together and once they started too some stuff became a bit predictable. But the characters were likeable and it had its moments where it made me laugh or feel something. Bottom line is, would I read this book again? Honestly no. Probably not. But since there was a...hello! Major cliffhanger...ugh, I will more than likely be reading the sequel because I'm interested enough to find out what happens next.